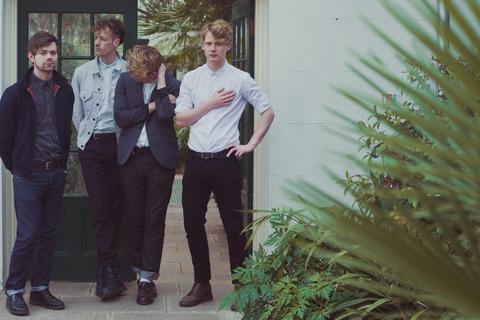 The Crookes consist of George Waite, Daniel Hopewell, Russell Bates and Tom Dakin.
The Sheffield-based newpop dreamers have announced their umpteenth tour of a sizzingly busy career. The past three years have seen them release two full albums, one mini album and a slew of jaggedly romantic indiepop singles, as well as tour their tyres off in hot pursuit of international glory. Autumn 2012 sees no let up in their handsomely hectic schedule to promote their new ‘Hold Fast’ album.

The entire second album was written in Europe in a tour van where they listened exclusively to Motown and Stiff Records. The album was written during a heat wave and the songs have the unmistakable sound of Summer and youth, and whilst the backdrop for these songs may have changed from Northern England to the Continent, they still retain the unmistakable poetry and Romance which The Crookes have become known for. It is an album of intelligent pop music.

Whilst on the road the band have built up a Cult following known as the “Bright Young Things” and are at the forefront of the nascent NEW POP movement in the UK guitar scene. This devoted fan base has translated to sold out concerts around the world including three shows in Tokyo and the main room of the legendary Paradiso club in Amsterdam as well as headlining festivals in Germany, Holland and Spain.

The band have recorded live Sessions on BBC Radio's 1,2,4,5 and 6, and their song "Backstreet Lovers" was voted number 24 in the Single of the Year Campaign on Radio 6.