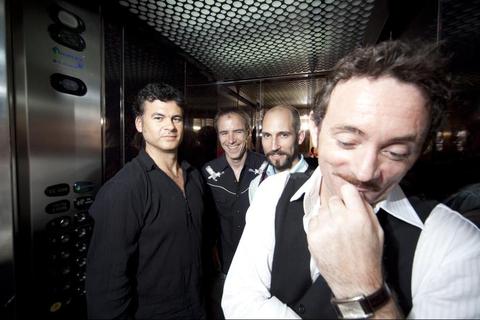 Track Dogs - Rock with a box and a bugle!

Named after the maintenance teams that work the NYC subway system Track Dogs are a four piece acoustic act based in Madrid, Spain.

Formed in 2007 the band cut their teeth at the Edinburgh Fringe Festival playing 27 shows in 7 days. Their sound is unique in their use of cajón (flamenco box drum) instead of drums and trumpet as opposed to electric guitar and this combined with four part harmonies gives them a fresh take on traditional folk/indie-pop stylings.

The band are getting ready to kick 2013 off with a new EP of three songs; 1. "Dust Devil"; 2. "Brandy (You're a Fine Girl)", a reworking of the 1972 US hit by Looking Glass , which was also covered by the Chilli Peppers, and 3. "Take My Word", a quirky track featuring ukelele.

The video for "Dust Devil" features the band doing their best spaghetti western impressions (along with some nods to modern and cult film making) filmed with the help of some of Spain's best movie stunt people and to say the least they had a blast filming. The vid will be out by mid February.

They follow this up with an 18 date tour of Spain as well as gigs in Ireland. The band are also thrilled to make their US debut at SXSW 2013.

Lead singer Garrett Wall continues to sing and write for TV and cinema and was featured on the soundtrack to "Buried" starring Ryan Reynolds. He is also main vocalist on all 52 episodes of acclaimed Spanish animated series "Let's Go Pocoyo".

The show at Red Eyed Fly on Friday, March 15