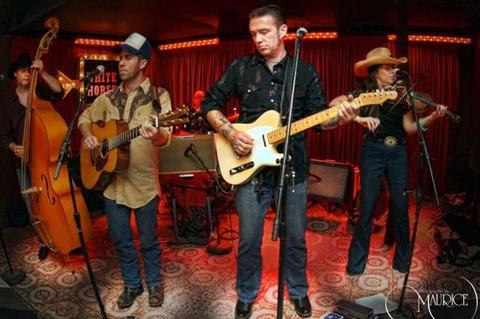 Horse Opera formed under the leadership of frontman/guitar player/songwriter, Jimmy Deveney in 2006.
The band developed a name in Austin through its weekly residency gig, 'the Atomic Honky Tonk' at Ego's bar in 2007/2008. Horse Opera then went on to record, produce, and release their own debut studio album, 'Sounds of the Desert', which received high praise from critics, and has sold very well on the road, in stores, and on line, since its release in May 2010. Through their own self promotion, the band scored a US/European distribution deal after the record had been out for a year. In 2010, Horse Opera also began touring the nation, and was on the road for nearly two years almost constantly. The band also went to Europe to play the 'Mirande country music festival' in south France, in July of 2010.

After some personnel changes, and the addition of singer, songwriter, Howdy Darrell, Horse Opera is finishing up their second studio album, which will come out in late 2012/early 2013. The band is playing all over Texas, and touring neighboring states while making the album. The new cd should be out in March of 2013!

Here's some reviews for 'Sounds of the Desert':
"Yes, heartache abounds on Sounds of the Desert, but the songs are so darn tuneful, the melodies so rich in traditional country elegance, the playing so naturally conversant in idiomatic touchstones, and Deveney’s vocals so striking and heartfelt that the sorrowful tales actually elevate the spirit, bring a body some comfort and solace (and not necessarily of the “better him than me” kind). Deveney, who evinces a twisted sense of humor in relating his plight, both vocally and as a song craftsman recalls no one so much as Rodney Crowell, circa Diamonds & Dirt. That’s not a comparison one makes lightly, but Deveney is worthy of it. He’s absorbed some Gram Parsons in his day, too, some Sir Doug, some Billy Joe Shaver, some Waylon, of course, but he’s not imitating any one of them—he’s authentic to the bone. There ought to be much more when this came from, but for now Horse Opera can count its new long player among the best hard-core country albums of the oughts. So let’s go to where this music is playing. Immediately".- David McGee, The Blue Grass Special

"Austin’s Horse Opera is an honest-to-goodness country band. The quartet’s debut album, Sounds of the Desert, is a two-steppin' joy chock-full of pedal steel and heartbreak. It’s fun. It’s lonely. It makes you want to jump in your car (or pickup truck, preferably) and drive a dusty road to Texas because, surely, that’s where the heartfelt music and dancing are happening."- Summer Olson, Albuquerque Alibi