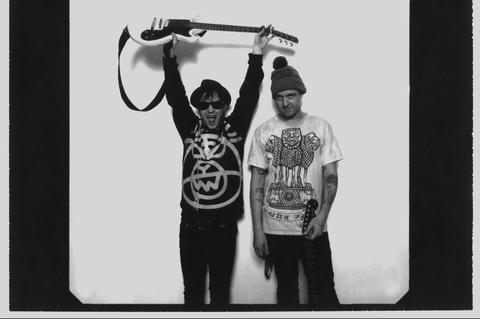 Listen to The Come to Get Us

The Death Set, from Brooklyn, originally hails from The Gold Coast, Australia. It was here where Johnny Siera met co-founding member Beau Velasco in 2005. Drawn to one another’s reckless care of music, the duo united to write fleeting songs with lifelong hooks and overdriven melody. Hell-bent on recording and touring, The Death Set moved the U.S. originally to the gnarly streets of Baltimore then to Philadelphia then finally to Brooklyn.

Buoyed by the DIY network they found there, the band recorded and released the To (2006, Rabbit Foot) and Rad Warehouses Bad Neighborhoods (2007, Morphius) EPs, honing the noise of jury-rigged gear and overblown mics. The Death Set quickly became known for out-of-hand live shows, and carried that energy onto its first full-length recording, done at The Copy Cat in Baltimore, an artist warehouse studio where the band and many others lived at the time.

The Death Set’s debut album, Worldwide, on Ninja Tune’s Counter Records imprint came in 2008 and fully filled twenty-five minutes with eighteen breakneck songs. Produced, engineered and mixed by Siera at The Copy Cat, with further mixing by Rob Girardi at Lord Baltimore Studios, Worldwide boaseds the endearing sound of unrefined creation. From the timeless call-to-upraise-arms of “Negative Thinking”, through the rallying anthem of “Intermission”; the love-buzz of “Heard It All Before” along the serrated edge of “Cold Teeth”; through the wistful chime of “Had A Bird”, and the high-voiced androgyny of “Day In The Wife”; The Death Set exploits consonance to the fullest. “Around the World” enters enemy dancespace, while “Listen To This Collision” puts crowds on a crash course with each other.

With the addition of Jahphet "Roofeeo" Landis on drums (who has toured with Santigold, Spankrock, Amanda Blank, and Ninjasonik) and fellow Aussie expat Dan Walker on guitar, vocals and production, the trio set about touring and destroying all types of stages all over the world. From massive festivals like Fuji Rock in Japan and Dour in Belgium to DIY spaces to Parisian basements.

The Death Set have found touring partners and friends in Girl Talk, Bonde Do Role, Spank Rock, Ninjasonik ,Japanther, Best Fwends, Dan Deacon, Ponytail and many more. While The Death Set’s sound is most like that of its punk influencers -- Black Flag, Minor Threat, and Buzzcocks – it also bears the distinct mark of hip-hop and electronic styles in production, and as interludes in their raucous offstage outbursts.

The band were touted as the #1 biggest hope of the future by NME, “Best Live Band” by the Baltimore City Paper, The Death Set jams blindsiding minute-songs into compact spaces.

Which brings us to The Death Set’s new sophomore album, “Michel Poiccard,” which sadly comes prefigured by tragedy. Just as the pair were about to embark on writing a new album together, Velasco, who had struggled with drug addiction on and off throughout his life, died of an overdose.

The band were shattered, so much so that Johnny still finds it almost impossible to talk about. It wouldn’t have been surprising if the group had decided to call it a day. Relocating to Brooklyn and enlisting long time friend and Baltimore associate XXXchange (Spank Rock, Kele, The Kills) to man the desk, they created “Michel Poiccard,” an album which loses none of the charm of their previous “punk spazz” work but adds considerable depth, both in terms of the punch and bottom end that XXXchange brings to the table, and in terms of a sense of desperate loss or longing, which permeates everything on the record and reaches a considerable pinnacle on “I Miss You Beau Velasco” and the closer “Is It The End Again?”

There are songs here about mammoth Ecstasy binges (“Chew It Like A Gun Gum”), Beasties-like celebrations of arcane handshakes (first single, “Slap Slap Slap Pound Up Down Snap”) affirmations of relying on positivity thoughout the roughest of times "We Are Going Anywhere Man", a celebration of one of the stars of A Bout De Souuffle (“Michel Poiccard (She Yearns For The Devil)”), tales of smashed equipment and angry promoters (“Can You Seen Straight?”), with a dose of familiar, snotty, punk anthems about French girls with a penchant for taking it up the shitter (“I Like The Wrong Way”). Diplo drops in for a fight and ends up giving them a keyboard line for “Yo David Chase!”. Spank Rock guests on “7PM Woke Up An Hour Ago”. Yes, all of them are instilled with the same manic Ritalin-and –Sunny-D-induced energy of their earlier records, but it feels like something deeper has happened here, too.

Above it all floats the spirit of Beau Velasco, amused and laconic. Words of his were rescued from samplers and old ProTools sessions so that it is his voice that opens the record with words which could serve as the group’s mission statement, perhaps never so fully realised: “I wanna take this tape and blow up ya fuckin’ stereo!”

The Death Set have an upcoming EP on Steve Aoki's label "Dim Mak".