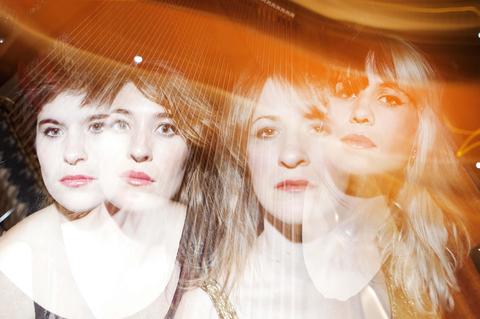 Listen to Inside My Head

From Wellfleet Massachusetts, a town of crashing waves, gnarled pine trees, and the only town clock in the world that still rings ship’s time, step the Parkington Sisters. Like their hometown surroundings, they have “a collective magic — part chemistry, part alchemy, and entirely mysterious.” The four sisters emerge from a lineage of musicians, each a songwriter and dynamic multi-instrumentalist; Rose plays piano, guitar and accordion, Ariel and Sarah play violin and viola, and Nora plays violin and percussion. They have a magnetic stage presence and can feel at home in front of a rock crowd at the House of Blues, but just as easily adapt to the sophistication of Symphony Hall. With incomparable vocal harmonies and intricate string arrangements, their music is at once timeless and fresh.

2012 has brought many opportunities for the Parkingtons. In October, they will be joining Dispatch on their “Circles Around the Sun” reunion East Coast tour. They have toured extensively across the US, Canada and Europe with the Dropkick Murphys, opened for Mavis Staples at Symphony Hall in Boston, performed at the 2011 Bonnaroo festival and even shared the stage with Bruce Springsteen. They have performed on records for State Radio, Dropkick Murphys, Dub Trio, Sonya Kitchell, The Spring Standards, Mieka Pauley and The Horrible Crowes (The Gaslight Anthem’s Brian Fallon).

The sisters are currently recording their follow up album, which will be released early 2013. Their 2011 debut album “Till Voices Wake Us” was produced by Joel Hamilton (Tom Waits, Elvis Costello) and recorded at Avatar Studios, and Studio G in New York City. The collection of songs explores the darkness but also the hope of each new day, the light in September, the geese flying north, the deer dead on the highway, the struggle to move beyond. The album was selected by Acoustic Guitar Magazine as one of the top essential albums of 2011