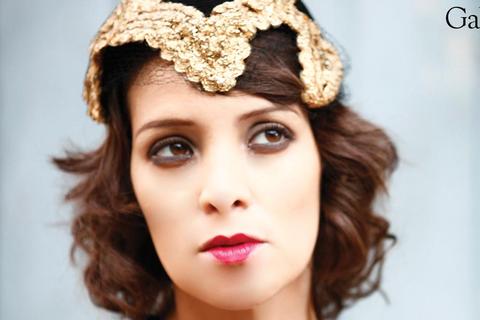 Her voice is a flash to the heart. With her three albums, Still the Unknown (2008) and Illustrated Songs (2011), Postales (2012) and the EP, A Good Old Christmas (2010), we can give account of that, for the stunning, sweet and firm voice she possesses, with blues as a reference and soul-folk as a detail.
Besides, Gaby Moreno slowly achieves the songs written by her, providing them with an endearing charm based on sober instrumentation, elegant harmonies and an unexpected timbre, so that in every performance she glows, without difficulty, a beautiful fire in the heart of the listener.
Before she was born and from her mother’s womb, she was already sending signals that music belonged to her. At the age of 5 , she had etched in her mind the lyrics of songs from children’s tales and Spanish zarzuelas, and at the age of 7 she impressed her first singing teacher, Marina Prado Bolaños and at 10, she stole unanimous ovations when she stepped on a stage and sang for the first time. Shortly after that, she showed an affinity for the saxophone-the guitar came incidentally. At the end, this last instrument became her faithful friend. But it wasn’t until she was 13 years old when she experienced one of the biggest shakes of her life. On a family vacation,walking down the streets of Times Square in New York, she stopped and her attention was taken away by the intense voice of an African-American woman in a rhythm and style that was completely new to her. She just waited for the break to ask the woman: What are you singing?
“It’s the Blues, Honey”, she answered.
Since then, her footprint is undeniable and so, she bought compulsively whatever she could find of blues albums. It started with Koko Taylor and it hit rock bottom with Robert Johnson and Huddie Ledbetter. One thing led to another, Jazz, Soul, sixties Rock, The Beatles, The Kinks and The Zombies, among many others, ended up conforming the creative materials which served her to write her own songs and sing them.
In Guatemala she focused on performing at different places and producing recordings. One of the most publicized and with the biggest impact, was a very personal version of the National Anthem of Guatemala (1997), in the centenary of this patriotic symbol, which had its original lyrics modified in 1934 by grammar and scholar José Maria Bonilla Ruano (Gaby´s Grandfather).
She also had the opportunity to receive several vocal lessons in Los Angeles by the famous vocal coach Seth Riggs, whom also had worked with Ray Charles, Michael Jackson, Stevie Wonder and Barbra Streisand, among many others. These vocal lessons, she admitted, were vital.

Gaby's experiences both professional and personal and the uncanny desire to record her first album helped her make it real. In these circumstances, she recorded the already mentioned "Still the Unknown". This is how, for the first time, she leaves a mark of her artistic capacity, which brought in Tracy Chapman to invite her as supporting act for her North American tour. Same happened with Ani DiFranco. Both, folk singer songwriters. The first one, a Grammy Award winner and the second one, nominated for the same award.
Her success and achievements grew in 2010. After recording the song Smile, (original music by Charlie Chaplin) for the documentary film The Cove, which was awarded with an Oscar by the Academy that same year. The name Gaby Moreno reappears as a composer in the nomination of the “Outstanding Main Title Theme Music” category at the “Primetime Emmy Awards”, for her co-authoring in the main theme of the television series “Parks and Recreation”. Also in 2010, sheparticipated in one of the most prestigious and long time rock festivals in Denmark, “Roskilde”,where she emotively sang in front of 17,000 people, accompanied by the Youth Radio Symphony of Denmark, directed by the veteran pianist, composer and producer, Van Dyke Parks. And as if nothing had ever happened, the next year without any push or support from a label, her independently released album “Illustrated Songs” reached #1 in sales on Itunes and Amazon Latin. That led her to many concerts in the U.S. and Europe, in countries like France, Germany, Switzerland and the Netherlands. She had already performed in some of these cities, but in August and September of 2011, she toured them including a performance in the “Harleem Jazz Festival” in the Netherlands.
And now in 2012, Gaby Moreno enters with strong pace to the Latin-American music scene, thanks to the invitation extended by her fellow countryman and one of the most successful Latin American artists of all time, Ricardo Arjona, to record the duet “Fuiste Tu”. The song has garnered great acceptance among audiences. That and a “Tour de Force” with more than 20 countries in the American continent bring up a vertiginous series of activities and projects on the artistic career of the singer. Moreno now releases the third album of her career “Postales” (under Arjona’s labelMetamorfosis), completely in Spanish and surely will leave the trace of success like the last ones.
In parallel, the singer continues to consolidate the English speaking market. It was a shock seeing her perform for example, on Jay Leno’s show on NBC, right next to stars like Kris Kristofferson, Jonny Lang and Shawn Mullins. It was here where the new exclusively debuting song "Toast to Freedom" commemorating half a century of existence for Amnesty International was performed.

Those are the highlights shining in the already intense artistic life of Gaby Moreno, where she demonstrates that emotional fire in which she impregnates her songs. That’s the result of authenticity and clarity carried forward, and a conscientious, disciplinary work in pursue of forming a unique sound, touching, free and brave.