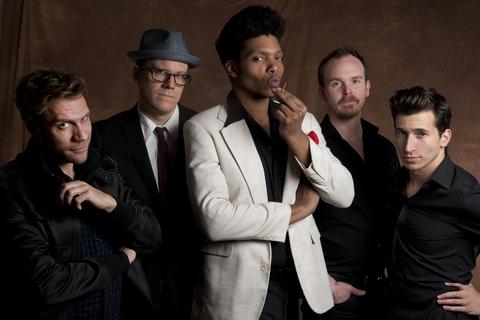 What does post-punk soul look like? Six and a half feet of raw emotion and
sweat, with one leather boot planted in gutsy R&B, the other in taut minimalist
grind. Snarling at the crowd beneath an afro pompadour, while indulging in a sly
wink, singing to you directly, and here to make you dance. What does post-punk
soul look like? It looks like JC Brooks & the Uptown Sound.

JC Brooks was born the son of a Jersey funk diva, his voice erupts with heart
and heartache over the ferocious rhythm and star-time charisma of guitarist Billy
Bungeroth, drummer Kevin Marks, keyboardist Andy Rosenstein, and bassist
Ben Taylor. With a take-no-prisoners live attack and lyrics speaking of the
torment and triumph of these tumultuous times, it’s no wonder that the Chicago
Tribune called JC Brooks "the real deal". This is a soul band rallying against our
disaffected and disengaged era, connecting with people the old-fashioned way,
by whipping them into a frenzy with honest appeal and unbridled enthusiasm.

The Uptown Sound has attracted a true-blue grassroots following, with
MOJO Magazine identifying them as "one of the hottest US soul acts". Since
unleashing their Bloodshot Records debut “Want More” (“A lively set of gritty old-
school soul and funk injected with raw garage-rock aggression” - KEXP), they’ve
barnstormed North America and Europe relentlessly, while burning up NPR and
AAA radio with their stomping cover of Wilco’s “I Am Trying To Break Your Heart”
(which they performed with the song’s composer, Jeff Tweedy, at Wilco’s Solid
Sound Festival).

JC Brooks & the Uptown Sound have toured, warred, scored, and they're not to
be ignored. Bear witness, for these young men are on the move and they know
what post-punk soul looks like. It looks like the future.