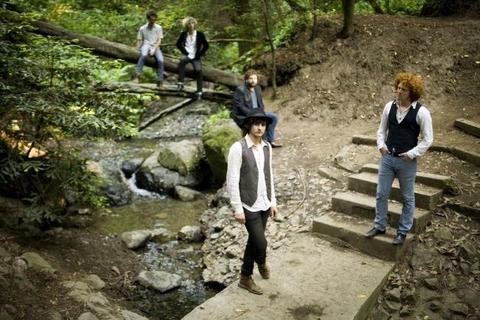 Listen to Roll With The Times

Oakland, California’s Tumbleweed Wanderers combine soul, folk, and rock and roll to create a hugely dynamic musical experience. They weave through their shows with smooth transitions, bringing the listener from dark chaotic banjo-rock, through intimate acoustic harmonies, to energetic explosions of soul.

Since forming in April of 2011, TW have been bringing their electric shows to an increasingly wider audience, from their early performances at small bars and cafes, to becoming a major local headliner, selling out shows at the Bay Area’s best venues such as Great American Music Hall and Bottom of the Hill. Since recording their debut full-length album, they have entered a period of near constant touring, starting on the West Coast, but now including all of North America, most recently opening for Angus Stone at renowned venues in the US and Canada.

Tumbleweed Wanderers recorded their debut album, So Long, at indie rocker John Vanderslice’s Tiny Telephone Studios in San Francisco, with Vanderslice himself producing the album. Recorded to tape and released on vinyl as well as on CD and digitally, So Long captures the band in a raw, live state reminiscent of recordings from the pre-auto-tune era. The album is meant to bring the listener on a two part (Side A and Side B) psychedelic musical journey, through its dynamism and gapless transitions, also including additional singers and horns.

Getting much of their early momentum from their memorable, loud and energetic acoustic street performances (including mandolin and trash can kick drum) outside of large Bay Area concerts, the band continues to busk these shows when in the Bay Area, but also brings their street performance on the road, often surprising unsuspecting pedestrians with a level of performance uncommon on the streets of most American towns and cities.