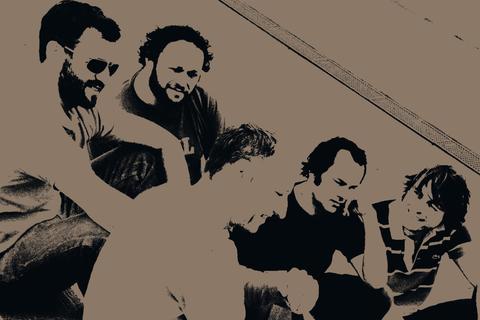 Listen to I Human, Radio Version

Jazzanova is many things to many different people. For more than fifteen years the eclectic collective from Berlin has been busy producing, composing, arranging, remixing, DJing and generally shaping our musical world – in the clubs, on the air, in the studio, live on stage, and with their label Sonar Kollektiv. Their „very fertile musical world“ (Time Out New York), which does „light a musical tinderbox“ (The Face, UK), is „one of the best fusions of all the disparate elements of club music, yet“ (Straight No Chaser) and „has dominated the jazz-dance and down-tempo scenes for the past few years, both with its own label and with countless remixes“ (Pho- enix New Times). Ever changing and evolving, Jazzanova went from their early sampled and programmed productions, culminating in „In-Between“ (Jazzanova Compost Records - JCR025-2, 2002), via the „Belle Et Fou“-soundtrack (Sonar Kollektiv – SK111CD, 2007), which they recorded with a full orchestra plus band, to the singer-songwriter Soul of their album „Of All The Things“ (Univer- sal, 2008). For the past three years Jazzanova has also been touring internationally with a nine-piece-band, which now culminates in their newest release: „The Funkhaus Studio Sessions“ (Sonar Kollektiv – SK237CD, 2012). The album represents their exciting „live playlist“, a success from electronic-events like „Melt!“, or Pop-festivals like „Heineken Opener“ or „Flow“, to „North Sea Jazz“, „Capetown Jazz“ or „Java Jazz“. Played by the full band in the distinguished studios of the „Funkhaus Berlin Nalepastraße“ this brand-new production consists of originals spanning Jazzanova’s entire career: all new, updated and instrumentally re-imagined versions, from their groundbreaking „Fedime‘s Flight“, originally released in 1997, via legendary remixes and on to a taste of their score for the revue „Belle et Fou“, plus the very first recording of „I Human“, their fantastically soulful new theme-song - a statement with different meanings to different listeners.
Jazzanova met on the Berlin club-scene in the mid-Nineties, a time when „Mitte“ was still a ghost-town during the day, which came alive at night with party-spots like „Delicious Doughnuts“ on the corner of Rosenthaler Straße and Auguststraße. A haven for all things jazzy and funky, the club became the birthplace of the collective in 1995 during a night of DJing in which they found truth in each other‘s musical styles - and decided to refine their various inspirations into a new sound, incorporating and bowing to a plethora of dance-oriented music from the past four decades. Two years later, Jazzanova got its first big break when DJ and „Worldwide“-presenter Gilles Peterson aired „Fedimes Flight“, the collective’s debut-single, on his radio-show for the BBC. The song was the first release on JCR (Jazzanova Compost Records), their new label-platform in partnership with the Munich-based company of „Future Sound Of Jazz“-fame, and was soon followed by „Caravelle“, yet another hit on the international dance-underground. Spreading their sounds and ideas with inspired DJ sets, they were among the first DJs from Berlin in demand all around the world. During this time Jazzanova also got to work on a series of widely acclaimed remixes for fellow innovators like 4hero, Koop, Ursula Rucker, United Future Organization, or Ian Pooley, most of which were collected in the two-disc-set „The Remixes 1997-2000“ (Jazzanova Compost Records - JCR013-2, 2000). After a select few productions under their own name, as well as JCR-releases by Koop, Victor Davies, the Underwolves, or Rima, as well as various-artist compilations dedicated to Polish Jazz from the 60s and 70s for instance, Jazzanova’s full-length debut „In Between” (Jazzanova Compost Records - JCR025-2, 2002) was released by popular demand and to critical acclaim in 2002. Five years and a host of productions, compilations, and remixes for a diverse range of artists like Lenny Kravitz, Common, Calexico, or Masters At Work, later, it was followed by their seminal sophomore effort „Of All The Things“ (Universal, 2008). The latter not only introduced an advanced and enriched sound-scape, but also their collaboration with the vocalist and bass-player Paul Randolph, a veteran on the Detroit-scene, revered not only for his own releases but for pro- ductions with Carl Craig, Moodyman, or Amp Fiddler. Today, Randolph is not only a featured performer with the live-band, but also the co-writer and singer of their new song „I Human“.
Jazzanova is in the midst of a fifteen year flow - from early underground-stardom via the big hype of the late 90s to the remarkably sophisticated matter of course that defines their current career. One of the reasons for this may be the way the members of the collective split qualities as well as responsibilities. Stefan Leisering and Axel Reinemer not only run the studio, composing, arranging, recording, and mixing everything Jazzanova; since early 2009 they have also taken over the duties of directing and touring interna- tionally with the nine-piece Jazzanova live-band. Alexander Barck, Claas Brieler, and Jürgen von Knoblauch broaden the music‘s appeal as DJs, not only on tour through the best clubs and festivals around the world but also on their weekly radio-program (for- merly on MDR Sputnik and Radio Multikulti, now on WDR Radio 1) and the Kaleidoskop-club-night, as well as with the hand-picked releases of their label Sonar Kollektiv (www.sonarkollektiv.com). And after all these inquisitive, innovative and sonically rich years the five of them still plan every new project and prospect together – Jazzanova is still a collective.