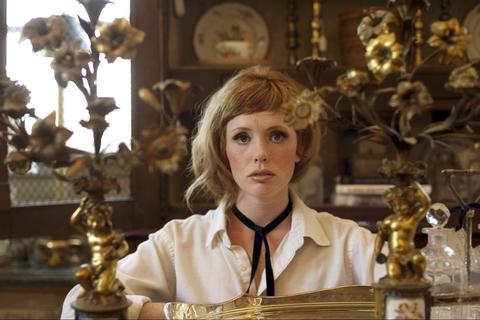 My name is Haley Bonar (rhymes with Daily Honor), I am a 29 year old singer/songwriter who resides in the lovely village of Saint Paul, MN. Since I can remember, I have been writing songs and singing. I grew up in the Black Hills of South Dakota and was blessed with creative parents and younger siblings who I could direct in our games, theatrics, and dances. In my senior year of high school I recorded and self released my ﬁrst batch of songs on a self-titled album, my graduation gift from my parents.

Everything changed for me when I left my home state for a new adventure and landed in the north woods of Duluth, MN. At an open stage called “Experimental Thursdays,” I brought my guitar and Farﬁsa organ and played a few originals and a cover of “California Dreamin’.” Little did I know that one of my musical idols, Alan Sparhawk of Low, was in the small audience. When I ﬁnished, he promptly approached me and asked me if I would open for Low on their upcoming tour. He eventually released my new album his Chairkicker’s Union label the following spring. Before I knew it, I had quit school, crammed my Honda Civic full of gear with my drummer, and was opening for Low across the country I had barely seen. I was twenty years old.

Since then, I have released three full length albums, several EPs, started a punk/new-wave side project (Gramma’s Boyfriend), had songs tapped for major motion pictures and have had the pleasure to tour from coast-to-coast playing some of the most amazing venues with some of the most talented artists in the world.

Just before the release of my most recent LP, Golder, I found out I was pregnant with my now one year old daughter, Clementine. This changed many things in my life, of course, and has had a major influence on the work I’ve done this year. “Bad Reputation” and “Down Sunny Roads”, which are included on the new 7” vinyl release, are two songs that will be included on my next full length record which is expected to be released in the spring of 2013.