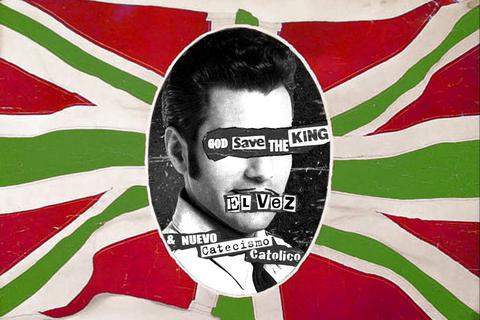 El Vez is the Latin sensation that is sweeping the Nation and the world, following successful tours in Australia, Germany, Spain, Norway, Holland, Austria, England, France, Belgium, Canada and more.

A modern multicultural hybrid of Americana and Mexicano, he is more than entertainment, he is a thinking man’s Elvis, a post-modern King with a Latin twist, the Chicano experience presented and told through the songs of Elvis.

El Vez is like a Jukebox exploded and put back together again. The Music mixes and remixes last centuries music, matching and contrasting various genre and styles, 5 different tunes may find their way into one Elvis song, becoming an EL VEZ song. The subject matter is Elvis through a latino looking glass. "In the Ghetto" becomes "En El Barrio", "Suspicious Minds" become "Immigration Time". Elvis' logo's like TCB...become "Taking Care of Business" an ode to the undocumented workers of America. Mixed in with El Vez originals (i.e.; the zapatistas in chiapas, safe sex) it becomes a musicophiles history dream.

El Vez has appeared on The Tonight Show, Oprah, MTV, HBO, CNN, Live with Regis & Kathy Lee, he has even been a question on Jeopardy & "mucho mas"…As raved about in Newsweek, People, Rolling Stone, The Wall Street Journal, Vogue, TV Guide, The New Yorker, Los Angeles & London Times and many others. H

El Vez brings a social-political-La Vegas-via-Memphis by way of Mexico-Rock and Roll revue featuring his top notch band the Memphis Mariachis and the world famous Lovely Elvettes (Lisa Maria and Priscillita). El Vez has R-O-C-K’ed across U-S-A and Europe, headlining festivals and opening for such greats as David Bowie, Carlos Santana, Linda Ronstadt, and the B-52’s. His Gold lamé Mariachi Suit has been placed on display at the Smithsonian Institute in a show tiles AMERICAN SABOR. Showing the history of Latinos in American Music, his suit placed among items from his idols Ritchie Valens, Celia Cruz, Carlos Santana, Tito Puente and more!

With over a dozen CDs under his Elvis belt, merchandise that includes T-shirts, videos and locks of hair. El Vez is a cross-cultural caped crusader singing for truth, justice and the Mexican/American way. You’ll leave an El Vez concert feeling proud to be Mexican, no matter what nationality you are.