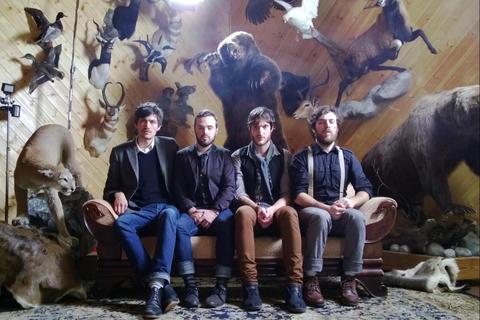 Listen to We want it all

With an excess of frenetic energy and penchant for well crafted, unconventional dark indie rock, Ravenna Woods has quickly become a favorite among Seattle concert-goers and music critics alike. Their 2010 full length ‘Demons and Lakes’ and subsequent follow up EP ‘Valley of the Headless Men’ earned them top KEXP album status 2 years in a row and a home at the well respected Chicago-based booking agency - Red Ryder Entertainment. They also garnered attention from the television network ABC, who have since hired Ravenna to write and record an original composition. (The song - 'Local Haunts,' is scheduled to appear in an upcoming episode of the television series 'Cougar Town.')
The band's reputation for exceptional live performances has awarded them the opportunity of sharing the stage with notable veteran and rookie acts ranging all the way from John Fogerty (Creedence Clear Water Revival), to bands like Devotchka, the Lumineers, Macklemore, the Head and the Heart, Typhoon and more.

Since the addition of a fourth member in early 2012, Ravenna has been hard at work writing and recording material for their 2nd full-length album, The Jackals. While a noticeable departure from the fundamental 'bare bones' atmosphere of the band's initial efforts, The Jackals seems to harness that element as a foundation from which to build rather than rely. For the most part the songs are still centered around tightly intertwining percussion and finger picked acoustic guitar, but it is the thoughtful layering of new instruments such as piano, electric guitar, synth, and cello that are responsible for expanding the dark borders of the compositions. The result is (what one music reviewer described as) "a collection of haunting orchestral hymnals that take the listener from their shared living space to evening silhouettes found at the end of the world."