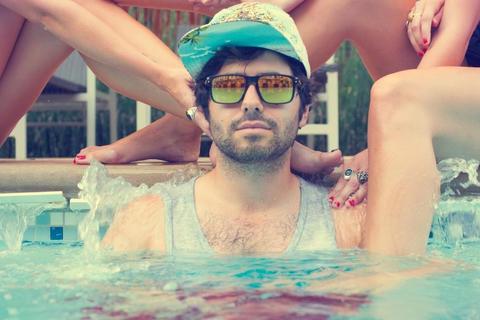 Listen to While We're In Love feat. Ghost Beach

Arriving out of seemingly nowhere, he’s one of those names that you could have easily slept on. One day he’s off at school playing local parties under a different moniker, and the next he’s off earning his way to the forefront of the nu-disco world. With little to no outside help, this success story started with a perfectly tuned remix of Duck Sauce’ forthcoming single “Goody Two Shoes”, which eventually found himself sitting atop of the ever so powerful Hype Machine charts. The first of many upcoming Hype Machine topping releases, Viceroy has now found himself being featured on nearly every blog in existence including the famed MTV, Fresh New Tracks, Gotta Dance Dirty, Vacay Vitamins, All Things Go, This Song Is Sick, and many more.

With a slew of chart topping releases on various labels including his well received pop-gem “Chase Us Around”, a collaboration with rising singer/songwriter Madi Diaz, the dance floor filling, Beatport Chart topping “Only Takes”, and a large section of official remixes for such well established artists as Passion Pit, Two Door Cinema Club, Yelle, The Knocks, The Penelopes, St Lucia, Ghost Beach, and more – Viceroy has assured that he is here to stay.

Now, after headlining shows across the country as a part of multiple headlining tours, touring both USA, Canada, South & Central America, an upcoming Australian tour, and appearances on a number of festival stages, multiple #1 tracks on the coveted Hype Machine charts, sharing the stage with such names as Diplo, Theophilus London, Miami Horror, Oliver, Plastic Plates and Treasure Fingers, while finding support from such names as Diplo, RAC, Goldroom, Treasure Fingers, Lenno, and more, Viceroy has began to teach even the coldest soul that it can in fact be, “Summertime, All The Time”.

The show at Avenue on Congress on Friday, March 15