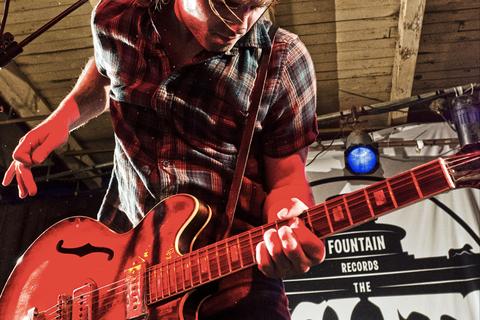 Listen to Left Over Right

Detroit’s masters of heavy soul, The Sights, are a five-piece rock ‘n’ roll band renowned for both their incendiary live shows and acclaimed song-writing. Think Big Star & Badfinger fronted by Steve Marriott and you’ll get a pretty good idea of what makes these guys tick. Hailed by critics and fans alike, they continue to build on an incredible 14-year legacy of uncanny blues-rock meets power pop.

The Sights combine the unobtrusive honesty of The Band with countless slivers of influence from their own personal record collections: Ike and Tina, Solomon Burke, The Everly Brothers, Bob Seger, Tim Hardin and all manner of raucous, infectious songwriting. Starting in the summer of 1998, famed typhoon of energy Eddie Baranek (guitar/vocals) fronted evolving line-ups through 2000’s Are You Green?, 2002’s Got What We Want and 2005’s self-titled The Sights – all recorded at Jim Diamond’s (White Stripes, Electric Six, Dirtbombs) Ghetto Recorders in Detroit.

2010’s Most of What Follows Is True was an overwhelming critical success, placing in the top fifteen percent of The Village Voice’s 2010 Pazz and Jop listing and garnering press accolades from around the globe. With that record, The Sights achieved an unprecedented level of song and studio craftsmanship. In an era of soulless keyboards, drum machines and Autotune, Eddie & Co. responded with thrillingly catchy songs. No gimmicks, no studio trickery – just inspired rock ‘n’ roll from the heart.

The release their seventh effort, Left Over Right topped 2012’s countless achievements. On it, Baranek is joined by Jarrod Champion (keyboards/vocals), Dean Tartaglia (saxophone/vocals), Kyle Schanta (bass) and Skip Denomme (drums) where they deliver not only their most soulful album to date, but do it with all of the intensity that has fueled their previous recordings and live shows for well over a decade. The Sights also released a new single (“Eso No Está Bien Pequeña/Like Two Little Kids”), supplied the music for two Chevrolet ads and played in front of over 140,000 fans in support of Tenacious D’s North American and European tours.

The Sights’ precocious ability to blend frenetic garage rock with ’60s pop and create something equally classic and catchy has garnered consistently rave reviews from both sides of the Atlantic. NME wrote “[The Sights are] a revelation – a treasure trove of sparky and wildly immediate songwriting” and Rolling Stone commented “at last – a new Detroit-garage band that comes in colors.”

Raucous? Infectious? That pretty well sums up The Sights’ live shows as well. It’s a rocket-ride that has been experienced by countless audiences throughout North America and Europe. If you love – really love – passionate songs that fire your imagination and move your ass, then you’re gonna really love The Sights.