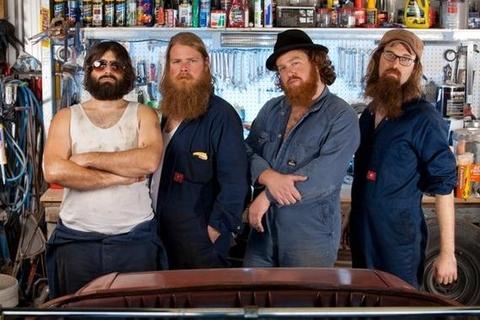 Listen to You Should Consider Having Sex With a Bearded Man

The concept of The Beards is simple - A folk rock band that exclusively perform
songs about just one subject: Beards. With a three-album back catalogue of crowd favourites like If Your Dad Doesn't Have a Beard,You've Got Two Mums, You Should Consider Sex with a Bearded Man and No Beard, No Good, The Beards continue in their ceaseless journey to make the world a more beard-friendly place.

The Beards have gained a cult following in Australia after touring the nation relentlessly over the last few years. Notable performances include the Falls Festival, The Big Day Out, Woodford Folk Festival and of course their visit to Alaska to perform at the World Beard and Moustache
Championship's opening ceremony.

The Beards have always combined the brilliant and the comedic in creating online
content and the success of this is evident. Their YouTube channel has received
over two million views and their clips have received national attention on
Australian television.

In 2012 The Beards released their third album Having a Beard is the New Not
Having a Beard. The album's first single You Should Consider Having Sex With a Bearded
Man came in at 99 in Triple J's Hottest 100 and was nominated for the 2012
APRA Song of the Year. The album is nominated for ARIA Comedy Album of the Year 2012. Their album launch and consecutive second single tour sold out nationally and received
rave reviews. The release of the second single film clip ‘Got me a Beard’ saw the band receive increasing international attention. The fully animated clip has been shortlisted for a number of international film awards and received over 400,000 hits world wide in its first month on YouTube.

The Beards are responding to their international audiences and will take their bearded message to the North America and Europe in 2013.

Bearded men, put down those trimmers - the Beard Revolution has come.

The show at Maggie Mae's on Saturday, March 16