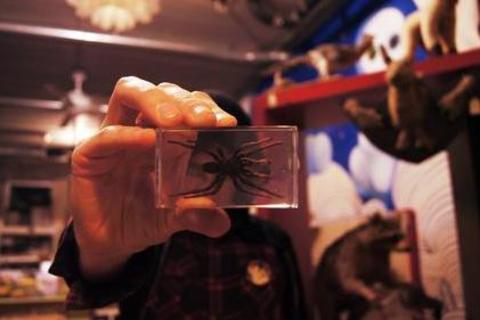 Listen to Your Apparition Stays with Me Still

“And the Tears Washed Me, Wave After Cowardly Wave” is Part 2 to “So I Ate Myself, Bite By Bite,” which came out in August of 2010. Part 1 is the true story of a normal man’s unraveling psyche and his grisly misdeeds. Years ago, I bought one of the real life serial killer’s journals at an auction in the woods. I was so moved by his seeming mediocrity, that I had to write about him. Part 1 covers a fairly large span of time in his life - childhood to his thirties. Part 2 takes place after his initial taste for blood and accurately ends with his death.

A million things have changed in my life since I recorded Part 1: I’ve changed cities, lost a ton of stock in a flood, am involved in a lawsuit with my former distro, opened a record store and lost someone incredibly close to me. In the move from Chicago to Savannah, the moving company I hired to haul my things not only charged me several thousand dollars more than my quote, but when the stuff finally arrived (3 weeks later than promised) a great deal of it was destroyed. My cello neck was snapped in half, my banjo was butchered, my expensive bell set was somehow obliterated, my organ’s insides were ripped to shreds, my main vocal mic was broken, not to mention all the damage they did to my non-musical possessions.

I was scheduled to record Part 2 in December, but I was unsure how to proceed. Since the main instrumentation was in shambles, I was forced to change my outlook on the album-making process. I recorded only using things mangled in the move. I felt that would parallel the storyline quite nicely. The result is a great deal of out of tune, broken and raw emotional sounds. You can hear these instruments dying with each note. Most of the percussion on the record is done by me bashing my anxiety pill bottles onto the floor or table. Oftentimes they are not even in beat. For the three weeks I recorded this album, I was at an all time low. This is some real downer music, but looking back, it was quite fun to make.

Like Part 1, the LP version of “And the Tears Washed Over Me, Wave After Cowardly Wave” is presented like a phenakistoscope, a classic Victorian animation machine. If you thought picture discs and colored vinyl were cool (both mediums you Graveface aficionados will know a lot about), wait until you get a load of William Schaff's painstaking, brilliantly delivered design. It's truly a remarkable accomplishment in the annals of the Album as Artform, which is a hallmark of Graveface Records.