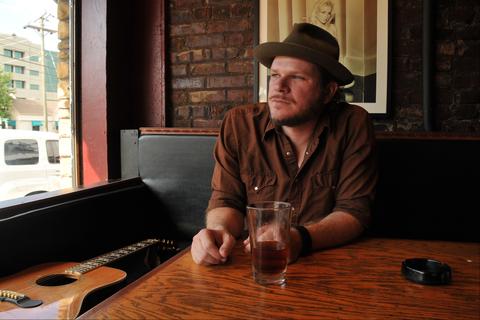 Listen to AM Country Heaven

“There has always been pop music, but country music was always
the avenue out of adolescence and into the grown up world with
grown up issues like responsibilities and family. Someone’s got to
keep it alive, to preserve that kind of sound. That was our aim with
this record.”
Jason Eady’s extensive background in “grown up issues” is what
explains why the word “poet” is so frequently associated with his
name. A six-year stint in the US Air Force as a translator placed him
in a slew of foreign cultures giving him a universal look into the nature
of human beings and a good jumping off point for his comprehensive
lyrical translations. The Mississippi native and Texas transplant has
spent the last seven years in an incubation period undergoing a
musical metamorphosis that has led him through lonesome delta
blues, inspirational church house harmonies, poetically spun tales of
Americana and into the naked and honest regions of good ole’
country music.
His three previous record releases have laid an impressive
foundation starting with his 2005 debut FROM UNDERNEATH THE
OLD (produced by Walt Wilkins and Tim Lorsch). That was followed
by his 2007 sophomore release, WILD EYED SERENADE (produced
by Eady), which was tagged as the Top 50 Albums of the Year by the
No Depression reader’s poll and reached #14 on the Americana
Music Chart. WHEN THE MONEY’S ALL GONE (produced by Kevin
Welch) is the last anyone has heard from Eady, until now.
AM COUNTRY HEAVEN, Eady’s fourth record release, originated as
a side project with friend (and producer) Kevin Welch. The plan was
to lay down some old school authentic country music out of sheer
self-indulgence and as a labor of love. As the recordings got
underway more and more people appeared in the studio contributing
their ideas and adding their personal touches until their side project
evolved into what is the highly anticipated album everyone is talking
about. Eady says, “I love that old school country music so much.
There doesn’t seem to be a whole lot of artists doing it these days.
It’s almost the opposite…like people are running away from it. I admit
that this record is a drastic departure from anything I have done
before, but this is where my heart is.”
AM COUNTRY HEAVEN features Redd Volkaert on guitar, Earl
Poole Ball on piano, Tom Lewis on drums and Kevin Smith on
acoustic bass - all members of Austin’s all-star team of country
music players called Heybale. Combined, they have recorded and
toured with artists such as Merle Haggard, Buck Owens, Johnny
Cash, Junior Brown, Dale Watson, Connie Smith and Johnny Bush.
They’re responsible for the southern swagger on this album’s tunes
like “AM Country Heaven” and “I’ll Sure Be Glad When I’m Wrong.”
Add legendary pedal steel player Lloyd Maines on the soulful
“Longer Walk In The Rain” and “Lying To Myself” and a special vocal
appearance from the incomparable Patty Loveless on “Man On A
Mountain” and Eady’s rich baritone timber, and what you have is a
pure honky-tonk affair in the tradition of all the great troubadours that
came before him.
In addition to his own albums, his talent for prose has been embraced
by his peers landing him two cuts on Micky and The Motorcars’ latest
record RAISE MY GLASS, one cut on Eleven Hundred Springs’
forthcoming record and two co-written cuts on The Trishas’
forthcoming record. Eady also co-penned The Trishas’ latest single
“Drive.” Although the radical departure that is AM COUNTRY
HEAVEN is sure to strike fans like a storm without warning, it seems
that Eady is merely living up to his reputation for the element of
surprise as perfectly stated by USA Today who said, "This Mississippi
native’s blues-rocker creeps up like gathering thunderheads."