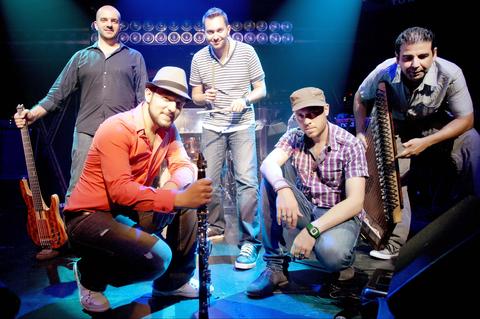 A Greek bassist ducked into a little bar in New York’s Alphabet City and heard the Eastern Mediterranean and Southern Balkans pouring across the packed room. The clarinet was keening and singing, and he knew every tune.

From this blown-away moment of discovery, the New York Gypsy All-Stars sprang, uniting bi-musical virtuosi raised on the lush sounds of Macedonian, Greek, Turkish, and American roots and forged in the halls of the world’s best music schools. With composerly ears and a madcap relish for ill and crunky sounds, the quintet of crack musicians tears through the tollgates separating the region’s interlocking roots on the long-awaited album of original pieces, Romantech (Traditional Crossroads).

“We use lots of musical elements in our original compositions that are typically Balkan Romany in style but aren’t necessarily in your face, like the 9/8 rhythm on tracks like ‘NY9’ or the way we use musical ornaments throughout the songs,” Lumanovski muses. “But more important than that is how we use the Gypsy term in a broader sense. We are taking what the Gypsies did, traveling from India to the Balkans and on to Western Europe and putting together the best musical ideas from every nation along the way. We’re open to the world, and we just take everything we like and make it one.”

The All Stars come by this impulse and skill naturally. It’s a rare thing, even in music-rich Southeastern Europe and in musician-packed New York, to find conservatory-caliber musicians who grew up playing weddings or rocking a čoček or a çiftetelli with local masters. Yet that’s exactly what the All Stars are: Alongside degrees from places like Juilliard and Berklee, they grew up jamming with local roots musicians or defiantly attacking traditional zithers with their bare fingers, getting into Latin jazz or bringing the funk.

Lumanovski, scion of a revered musical family in Macedonia, met Athens-born Panagiotis Andreou when the versatile bassist insisted he just had to play with Lumanovski, after hearing the clarinet player whip through an astounding array of hot traditional Balkan tunes in a little club on Avenue B. Andreou jumped on stage, tore into the music, and the room fell silent. “Everyone stopped at one point, and we just improvised on bass and clarinet for a long time,” Lumanovski recalls fondly. “There was an instant emotional connection.”

The duo started playing together regularly. At the urging of globally astute impresario and arts presenter Serdar Ilhan, the band was born, playing a jubilant crowd at their first big gig, a notoriously full-throttle show for the New York Gypsy Fest. Lumanovski and Andreou were eventually joined by Turkish roots maverick Tamer Pinarbasi, who had long experimented with the kanun (traditional zither), throwing out his plectrums in favor of bare fingernails and kneading together microtonal makam scales with Western harmonies; Australia-born, Turkey-raised jazz-loving classically trained percussionist Engin Gunyadin; and wild keyboard innovator and sonic mastermind Jason Lindner.

It’s in playing and improvising together—often for marathon sessions or ecstatic crowds from the Black Sea to Brooklyn—that the All Stars have honed their repertoire over the many years it’s taken the strong-willed, devoted musicians to craft and record Romantech.

“Balkan Bollywood” may sound like a novelty, but don’t be fooled: It’s a bittersweet, multipart romp inspired not only by Indian filmi tracks, but by Turkish melodies and Balkan ornamentation. “I had been playing around with this melody, trying ornaments in places where they usually don’t happen,” Lumanovski recounts. “I brought it to the guys, and we jammed on it with Panagiotis, Tamer, and Engin for four hours after a show at Drom. We stayed until 5 AM playing the same thing over and over, and this very cool, hybrid stuff came out.”

Cool stuff includes in the aching and mournful sound Lumanovski achieves on “Outcry,” a tune that hints at Armenian duduk resonance, contrasting with the piece’s nuanced piano chords and sprightly zither, while Andreou adds an Afro-Cuban montuno vibe (when not kicking out the Balkan jams, the bassist wins jazz awards for his work with Afro-Latin ensembles). “Romantech,” a wry rendering of techno beats using kanun and drums, wheels into a full-on Turkish longa, a style inspired by Anatolian and Balkan elements. Melodies get toyed with, built on, and reconstructed in a worldly interplay of sounds gathered from the musicians’ many travels and collaborations.

Through all the complexity and ability, a good-times vibe jumps out at listeners, making the hardest-core kopanitsa in 11/8 feel like an easy two-step. “We have a piece called ‘EZ Pass,’ because our music can feel like an easy pass to the Balkans,” Lumanovski laughs, explaining one of the album’s song titles and its ties to the New York area toll pass. “With an EZ Pass, you don’t stop; it