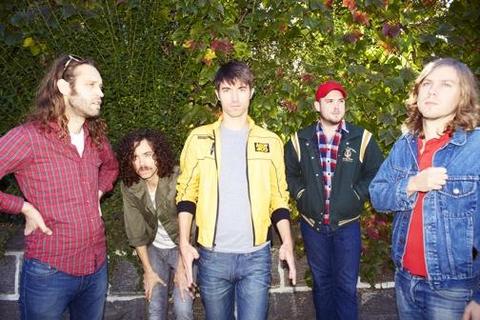 There are certain bands that demand to be listened in a certain way: Pink Floyd might require a bong & lazer light show; Led Zeppelin benefits from giant, wood-paneled speakers, and FREE ENERGY—a band responsible for having crafted some of the finest guitar-filled power pop this side of Weezer or Cheap Trick—should be played on a cassette deck in a Camaro screaming down the highway; stereo cranked, feather roach clip dangling from the rearview.

“Being from the Midwest definitely informed our aesthetic,” says Free Energy vocalist Paul Sprangers. “Growing up in a small town with radio and MTV—then later discovering indie rock and punk rock—really shaped the kind of music we make now. So, I had the same kind of unabashed love for Phil Collins as I did for Pavement—I don’t think I ever grew out of that. It probably shows.”

The story of FREE ENERGY, however, doesn’t begin in the backseat of a muscle car, rather St. Paul, Minnesota, where Sprangers and guitarist Scott Wells—both members of the late, great Hockey Night—were signed to NYC powerhouse DFA records based on their homemade demos. After signing and spending a year writing and demoing they moved to NYC to record with James Murphy. As the record neared completion, Sprangers and Wells moved to Philly, brought in their Minnesota friends to fill out the band, and toured relentlessly behind the release of 2010’s Stuck on Nothing.

While it might have seemed an odd fit for a power-riffing pop rock act to put out a record on a West Village disco label, the euphoric vibe of Free Energy-- embodied in tracks like “Free Energy” and “Bang Pop”—was actually a perfect compliment to the roster of artistically different but equally accomplished bands, such as Black Dice, Yacht, The Rapture, and LCD Soundsystem. The record spawned nearly two years of solid touring and a pile of accolades, including a Best New Music nod from Pitchfork and Rolling Stone’s assessment that the band “totally fucking rules.”

At a time when a lot of indie rock is mired in gloom or coated with layers of reverb, FREE ENERGY is interested in sounding like Thin Lizzy or Fleetwood Mac: old-school juggernauts that made clear, well-crafted hook-laden singalongs; songs about love, truth, and the journey within. It’s a time-tested formula, but clearly one that can still sound fresh in the right hands.

“For some reason, DFA was the only label that really understood us,” says Sprangers, “They got what we were trying to do, and could hear potential in our demos. We learned so much from their philosophy, and continue to apply it to this day--it was a true education. So, after having done a record with James and DFA—which was a dream come true—it felt like a good time to push ourselves further, which turned out to be making and releasing a record ourselves.”

As the band began work on album number two they flirted with a couple different producers. They cut an unreleased track with Jeff Glixman (the producer responsible for Kansas’ classic rock staple, “Dust in the Wind”) before doing a trial run with John Agnello. Agnello’s work with the likes of Sonic Youth, Dinosaur Jr. and The Hold Steady made him a good fit for the band, but it was his formative work in the 80’s with the likes of Cyndi Lauper, Hooters, and  Bruce Springsteen that sealed the deal.

“He really produced,” says Wells. “He came to band practices in Philly. He helped us shape the songs and get the sounds that we needed. He helped us get more clean, digital  drum sounds like The Outfield used, which was a priority for us. We wanted to make the biggest, brightest rock songs we could. ”

The resulting album is Love Sign, to be released on the band’s new imprint “Free Energy Records” in January of 2013. Much like it’s predecessor, the new record flirts with hysteria-inducing pop songwriting and classic rock production. Tracks like “Electric Fever,” “Hey Tonight” and “Girls Want Rock” demonstrate the band doing what they love—condensing handclaps, harmonies, fist-pumping choruses, and lazer guided guitar leads in such a way that the songs always feel vaguely familiar. These are songs that demand to be blasted in a car as one sings along at the top of one’s lungs. These are songs crafted by young men who clearly have an understanding of pop music’s DNA; the way a good melody can be more catchy than the common cold. Given their go-for-broke vibe, It makes sense that the band keeps a framed photo of Van Halen in their practice space.

Ultimately, Free Energy occupy their own interesting niche. Are they an indie rock band? A classic rock band? A power pop band? Even the band isn’t sure (“I wish someone would tell us what we are,” says Sprangers, “because we’ve been described as everything!”), but in the end it doesn’t matter. The tracks on Love Sign flirt with the great themes of lasting rock music—the search for truth, falling in and out of love, and the quest for happiness—without ever sounding like retreads of a bygone era. Love Sign proves that there will always be ways to reconfigure the rock and roll archetypes into something fresh and —for lack of a better word—rocking.

“When I think of great songs by Peter Gabriel, or Tom Petty, I hear the them almost like hymns. They speak to something greater than ourselves. Even the simplest rock music—songs about partying and girls—can be transcendental,” says Sprangers. “I hope people can relate to what we do on some level. I hope kids like it. I hope moms like it. I don’t care about being cool, I just want to connect. I want people to know that no matter what, life is good, and every experience is meaningful. Maybe that’s weird. But we definitely feel like weirdos and we always have…maybe we always will, which is totally fine.“