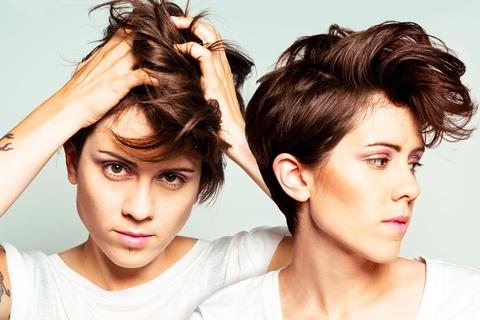 It’s hard to have a long career in pop music. Just ask all the one-hit wonders and sophomore slumpers, all the sure things who turned out to be yesterday’s news. It’s hard to keep a band together, hard to hold the fans’ attention. And it’s really, really hard to keep writing good songs, record after record, year after year.

Only a relative handful of artists have the vision and creative stamina to keep on going for the long haul, and most of them turn out to be shape-shifters, evolving and changing course as they go, trying on different personas and musical styles, surprising and sometimes disturbing their faithful followers—psychedelic Beatles, Christian Dylan, muscular Bruce, mystical Madonna. You can’t keep moving unless you’re willing to shake it up every now and then, to duck into a nearby phone booth and step out in tights and a cape.

Which brings us to Tegan and Sara, and their stunning new record, Heartthrob. If you know and love Tegan and Sara’s music, as I do, the exuberant, polished sound of Heartthrob will come as a shock, almost a deliberate provocation. What happened to those neurotic, self-deprecating indie rockers, the twins from Canada obsessively chronicling their crushes and heartbreaks? When did they become so confident and radio-friendly, so unapologetically mainstream? Are Tegan and Sara pop stars? Why would they even want to be?

After all, it would have been easy enough for Tegan and Sara to just make another record, keep the old machine humming. Things have been going well for them for a long time. Six albums in thirteen years, a passionately devoted international audience, some serious brushes with commercial success, an impressive catalogue of consistently wonderful songs, to my mind one of the most striking and underrated bodies of work in the past decade. But they finished their last tour feeling oddly dissatisfied. They weren’t kids anymore—they’d just turned thirty, and they wanted more. They felt restless, couldn’t understand why they weren’t reaching more people. So Tegan and Sara took a deep breath and a long look in the mirror, and popped into that nearby phone booth.

And out came Heartthrob.

“No one will confuse this with any of our other records,” Sara says. “It’s got a bigger, bolder, happier sound.” Tegan is explicit about the supersized ambitions motivating the record. “I kept asking myself: Can I hear this in an arena? Can I hear this on a teenager’s iPod as they’re riding the bus to school?”

The new album doesn’t just sound different, it represents a more collaborative way of making music. For the first time, the sisters actually wrote a lot of the songs together (in the past there were Tegan songs and Sara songs), and they surrendered more control than usual in the studio, dividing songs between 3 producers (Greg Kurstin, Justin Meldal-Johnsen, and Mike Elizondo) and a handful of outside musicians to capture the sound they were looking for. Tegan and Sara are both effusive about Kurstin’s role in the process.

“We intentionally went looking for a producer who wouldn’t dwell on protecting the signature Tegan and Sara sound,” Tegan explains. Sara sums up Kurstin’s role with a surprising metaphor: “Greg took everything we do and put it on steroids.”

For all the superficial differences, though, Heartthrob bears the true hallmarks of a Tegan and Sara record. The songs are terrific, full of lust and longing and regret, bouncing between the familiar poles of erotic rapture (“Closer”) and post-breakup despondency (“How Come You Don’t Want Me”). But the lyrics seem less confessional than usual, a little more universal and philosophical, as if Tegan and Sara are reflecting on the experience of passion rather than undergoing its ecstasies and torments in real time. For every urgent outburst—“Does your body shake when you get around me? Does your body ache when you think about me?” (“I Couldn’t Be Your Friend”)—there’s a moment of calm reflection, a retrospective clarity about past relationships: “When I think of you I think of your skin golden brown from the sun/Your arms outstretched your hair cut shorter than it'd been /But still blowing in the wind” (“Drove Me Wild”). There’s a hard-won maturity in these lyrics, hidden beneath the glossy surface of the music, and a willingness to tackle subjects beyond the confines of romance. This is especially evident in the striking song, “I’m Not Your Hero,” which examines the difficulty of maintaining artistic independence and personal autonomy in a politicized world: “I’m not their hero but that doesn’t mean I wasn’t brave/I never walked the party line doesn’t mean that I was never afraid.”

Heartthrob gives us Tegan and Sara in their superhero tights and capes, ready to conquer the pop universe, and the new outfits suit them just as well as their old-school jeans and T-shirts. Don’t be surprised if you hear these songs in an arena, or blasting on a car radio, or leaking from a teenager’s earbuds on a bus. That’s what they’re made for. And don’t worry if you experience a brief sense of disorientation the first couple of times you hear them, a momentary inability to put a name to those familiar voices. By the time you realize who you’re listening to, you’ll already be singing along.

Presented by: The Warner Sound Captured by Nikon