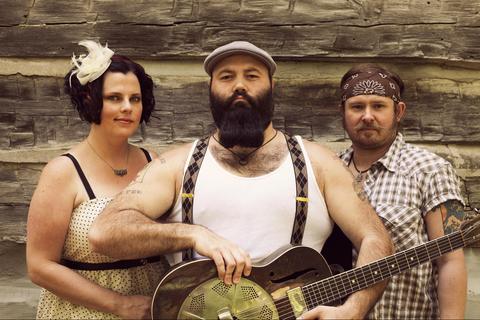 Listen to Something For Nothing

Roaring out of the southern Indiana foothills comes Reverend Peyton's Big Damn Band playing a brand of Americana and Blues that stands alone - Delta blues and hillbilly fervor combine with musical acuity sharp as razor wire - best know, this trio is a force to be reckoned with. The growl of a good truck engine, the fiercest passion for his country home and family and an uncanny ability to breathe new life into old forms of music give them a pedigree many Americana acts would kill for and an ironclad work ethic keeps them on the road 250 dates a year, playing for the people with hurricane force. Locked in with an audience, the band create their own community and welcome the crowd into it, transporting them away from their troubles to joyous release, the way great musicians have done for centuries. The Rev. J. Peyton, his wife Breezy and distant cousin Aaron "Cuz" Persinger are a living breathing embodiment of the traditions and hard work ethic native to their Brown County, Indiana home. Their new album Between The Ditches is a chronicle of this lifestyle.

With a reputation for their incendiary live shows well established, The Big Damn Band set out to make the album that would finally capture the same heat. Recorded at White Arc Studio in Bloomington, Indiana, the album was produced by The Rev. Peyton and Paul Mahern (John Mellencamp, Iggy Pop), and mastered by Brian Lucey (Black Keys, Dr. John, Shins). For previous albums, the band had recorded live, straight through in the same mode as a live show. Between the Ditches came together more slowly, with care. “We approached it saying we were going to make a record this time, not just a recording,” explained the Rev. He used a different guitar set up on almost every track, employing two ‘30s National guitars, a cigar box guitar, a custom shop Gibson flattop 1929 L2 and an Airline map electric guitar. The primary amps are custom Weber amps made by Weber speakers – both are one of a kind.

Their fifth album, Between The Ditches features a new level of craftmanship in both recording technique and songwriting. The Rev. feels that it's their best album to date."I'm very proud of this album, the songwriting and the playing." The guitar playing alone should put the Rev. in the same class with his much revered idols. The songwriting boasts an added maturity and runs the gamut in subject matter from the barn burning, tongue in cheek, “Shut the Screen”, (where "It’s too dang hot and the bugs are too dang mean") to the evils of strip mining, an issue close to the hearts of this Indiana born and bred band in, “Don't Grind It Down”. There seems to be a theme expressed throughout the album and stated clearly in their first single,“Devils Look Like Angels”: "Devil don’t live down in hell, the devil’s right here doing very well".

" Burn up some backroads, drive up to the store
They just don't make 'em like this anymore"

Rev Peyton's first introduction to music was his father's record collection of blues-oriented rock. At age 12 his father gave him a Kay brand guitar, eventually purchasing a Gorilla amplifier once he learned to play. And play he did. He became infatuated with pre-World War II country blues, and a desire to learn the fingerstyle picking of artists like Charlie Patton. Fingerstyle refers to using each of the right hand fingers independently in order to play the multiple parts of a musical arrangement that would normally be played by several band members. Bass, harmonic accompaniment, melody, and percussion can all be played simultaneously when playing fingerstyle.

Keith Richards has said that the first time he heard Robert Johnson's recordings he asked "Who's the other guy playing with him?" Of course there wasn't one. When you listen to the songs on Between The Ditches you will be hard pressed to believe it is only one guitarist.

"Nothing’s really free
It all comes with a fee"

Misfortune struck the Rev. early on in the form of a dehabilitating condition that caused excruciating pain in his hands. Doctors told Peyton he'd never be able to hold his left hand in fretting position again. But he persevered and when the bandages were removed, Peyton discovered a new flexibility and greater control in his fretting hand that enabled him to play in the fingerstyle that he longed to play.

"If it's me with you
Then we'll get through"

It was during his convalescence that he met his wife to be, Breezy. "I was crazy in love with her right from the start". He credits Breezy with installing a confidence in his playing and his life in general that he had previously lacked. Breezy Peyton's explosive washboard playing, sweet back-up vocals and striking good looks didn't hurt their live show either.
Completing the trio is cousin Aaron Persinger on drums. "He's a human metronome", says the Rev. Persinger’s drum kit gives new meaning to the term ‘stripped down’ and features a plastic 5 gallon bucket, for which he has a sponsorship deal for replacements. With their line-up finalized the band sold everything they owned in a garage sale and headed out on the open road.

In 2009, they toured opening for Clutch, an extensive headlining tour of Europe and began their relationship with the Van's Warped Tour, playing 12 dates in 2009 on the Kevin Says stage. They were on the entire 2010 Van's Warped Tour on the Alternative Press stage and they received the Best Band of Warped Tour award, voted by the crew, bands, and promoters. They've also toured with Flogging Molly, Rev. Horton Heat, Derek Trucks and Mofro just to name a few.

"Keep it between the ditches"

This band is fun sure, a lot of fun, but they are for real. From virtuoso musicianship to great songwriting, Between The Ditches has got it all. All from a little Brown County, Indiana band that's got the nerve (and the right) to call themselves, Rev. Peyton's Big Damn Band!