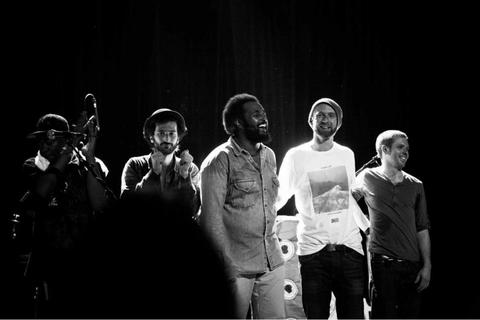 Of the many words that one might choose to define FETSUM’s long awaited debut, perhaps the most accurate is ‘global’. It’s an adjective that not only summarises the sound that he has fashioned since he first started writing in his early teens, but also his background. FETSUM’s parents were Eritrean revolutionists during the country’s thirty year War Of Independence, and he was born in Egypt after his 16 year old mother became a casualty of the fighting in her homeland when she was four months pregnant. Within 18 months they had moved to Italy, where he lived for the next two to three years, before heading on to Stuttgart, Germany, where his aunt had also been forced to flee while seeking asylum from the war. Initially they only planned to help her settle before returning to Italy, but they ended up staying, and it was during these formative years that FETSUM’s musical interests began to develop.

THE COLORS OF HOPE is consequently an extraordinarily assured, immediately accessible collection that calls upon a whole host of influences gathered throughout his idiosyncratic life, from soul to reggae to the Mande Music of Mali, from folk to rock to hip hop, and – inevitably, especially when one knows his story – far beyond. “I think I always had a very natural feeling towards music,” he explains in Berlin, the city where he now lives with his partner and young son. “It’s intuitive. I always had music around me, because the people that raised me did. So I had the whole spectrum of music, from classical to Arabic to Eritrean music, British rock, blues rock, whatever.”

But the roots of his passion go back way further. He was around 20 when he discovered that he had a natural affinity with other, often more ancient musical forms, including some for which his affection was somehow mysterious. “I realised that whenever I hear the muezzins (the Muslim officials who proclaim the call to daily prayers), it gives me goose bumps,” he recalls. “The sound stayed in my body as information, as a candle that could be lit again.” It’s this experience that lies at the heart of ‘Egypt’, one of the many highlights of THE COLORS OF HOPE. A moving account of a childhood experience that in all honesty FETSUM has no right to remember, it’s carried upon a breezy melody that perfectly matches the images of sycamore and fig trees by the banks of the River Nile. ‘Trials Of Time’, too, sees him cast his memory back into his past to conjure up a story of a starving family trying to scrabble a living from the land. “There are things we know theoretically, and there are also things that, even if we weren’t able to experience them at a certain age, they stay with us, as stories that are around you the whole time and are manifested in your family. They’re something that’s always there.”

FETSUM’s first musical explorations saw him circulating amongst Stuttgart’s flourishing 1990s hip hop scene, but, though the first album he ever bought was by Public Enemy, this was never quite where his musical talent belonged. His big break came via a friend who introduced FETSUM’s music – soon after he first started recording – to Patrice, the half Sierra Leonean, half German reggae artist, who was so impressed that he invited FETSUM to open for him across Europe. Other offers soon came in: support slots for the likes of Estelle, K´NAAN, Söhne Mannheims and Peter Fox. It was also Patrice who enabled him to record THE COLORS OF HOPE, which was laid down in the international star’s Supow Studio in Cologne. Characterised by a warm, acoustic, analogue sound, the album offers a subtle but carefree experience, full of light and shade, imbued with FETSUM’s own unique mixture of melancholy and hope. It’s full of humanity, self-belief and spirit, and even when it’s irate, it never looks at the world in anger.

The album’s most obvious influences include the likes of Otis Redding, Donny Hathaway, Bob Marley and Tracy Chapman, but it’s notable that FETSUM also acknowledges a whole slew of other artists and is as likely to praise Johnny Cash, Bob Dylan, Nick Drake, even early U2 as much as Salif Keita, Fela Kuti and Ali FarkaTouré. Forced to summarise his sound, he grudgingly describes it as “Urban Folk”, but, fortunately, articulate and tender songs like these don’t rely upon reference points. They speak to the heart and the mind, whether they be the swooning ‘Say Who You Are’, the joyful Afro sounds of ‘Waitin’ For You’, with its acoustic guitars, horns and whoops, or the calming Middle Eastern echoes of ‘Letters From Damascus’, named in honour of an uncle who was held in Syria for seven years after he escaped from Eritrea, a story which also inspired the song’s only lyrics, “I wanna get to you”.

There are also the darker tones of ‘Divided By Thoughts’, the celebration of freedom encapsulated by ‘One People’ and the astonishingly emotive, stripped back ‘Homeless And Free’, which arguably summarises FETSUM’s personal goals and ideals most potently, and also includes recordings of an impromptu church mass recorded in Sierra Leone. But the themes addressed throughout THE COLORS OF HOPE are equally as important as the music, and they’re also undeniably universal, whether they be issues of equality, as examined in ‘One People’ and ‘Divided By Thoughts‘, the true romance of ‘Queen Of My Heart’, or the spiritual aspects of his life, which he discusses in songs like ‘Say Who You Are’ and ‘Waitin’ For You’. The reggae-tinged ‘Emotional Android’ meanwhile considers the injustices of the capitalist system, but the one thing all these have in common is that they represent a sense of idealism that lies deep within FETSUM’s heart, something expressed on a record that manages to be all-embracing and personal, smooth but never slick, sometimes sorrowful and yet always optimistic. Remarkable as it may seem, FETSUM has succeeded in boiling down his unique experiences to elements that offer hope, joy and comfort. Music like this can only emerge from a soul that is articulate, candid and inquisitive, and these are THE COLORS OF HOPE.