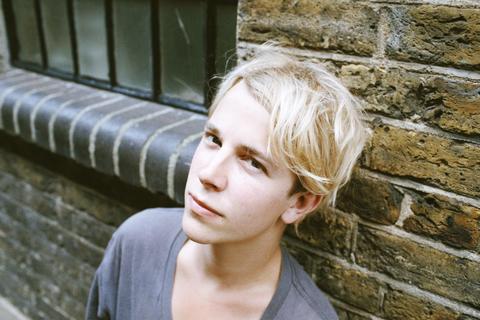 If there’s a certain youthful diffidence surrounding the remarkable Tom Odell it’s tempered with a sense of self-awareness which totally belies his mere 21 years on this planet. A beguiling mixture of idealism (he wants the music to do the talking , preferably releasing one album a year) and self confidence (he seems to exist happily in his own musical world) becomes somewhat incendiary when coupled with music so magnificently formed as that on his forthcoming debut album.

Because, if the craft of song-writing is one which is often seen as unfashionable to discuss, for this young Chichester-born maverick, the song is everything. Having written his own material since the age of 13, it was an eventual move to Brighton which precipitated his immersion in a scene which saw him quite simply have the confidence to walk into pubs and clubs and ask to perform on the spot.

“I just didn’t stop writing songs for an entire year. I used to stroll around Brighton with this massive keyboard and just go to these open mics all around town – and it was so demoralizing, but also really good for me”.

However, it took a move to London and an ad on the notice board of Goldsmiths College to finally galvanise the teenage songwriter into action; when he formed a group around him such was the power of his songs that, by his fourth London gig, he was signed by a management company, a publisher and, subsequently, a record label.

“I’ve always had this confidence in the songs; I suppose I was unaware of the failures that could happen to me” says an unfazed Odell now. “It was only when I got a publishing deal that I really felt that things were changing though, because I knew then that my songs would be heard”.

Such an acceleration of fortunes was down to the power of the songs which were by then emerging in torrents, many of which feature on Tom’s forthcoming debut album.

That songs of such maturity could spring from a teenager should not be surprising when you hear Tom discuss his love of film and his reading pleasures, which range through classics like F. Scott Fitzgerald, Kerouac and Hemingway, to Woody Allen, Wes Anderson and Hal Ashby. Despite much of his music being celebratory, there is also a sense with this artist that the expression of melancholy is equally as important. At 21 he manages to express emotions in as acute and accurate a fashion as many of the classic artists he so admires. It’s an unusual gift at any time but, right now, with much of the music world enthralled to instant gratification, the fact that Tom Odell’s songs have emerged in as pure and soulful a manner is extraordinary. He is the real deal, which anyone who has seen him fervently searching through the racks at Rough Trade will testify – an amazing young artist who is already so in love with music that he is planning his second album, even before the release of his debut. Those who attended the recent Burberry fashion show will also have had a preview of his music when his song “Another Love” was chosen by the worldwide brand for their spring/summer catwalk show.

Together with his band, who Tom credits with adding a heightened sense of power to the songs, Tom Odell will be supporting Jake Bugg in November. His debut EP “Songs From Another Love” will be released digitally on October 29. He has just finished his amazing debut album, further details of which will be announced soon.

“I hope the album feels human and real and that there are some flaws – because the flaws help make it what it is. Really, I’d love to live in a time when music felt uncontrived and imperfect and gave people a real sense of elevation. When it’s sad I want it to be REALLY sad. When it’s happy I want it to feel euphoric…I suppose I want the record to express the heightened feelings and emotions we all get in our lives”.