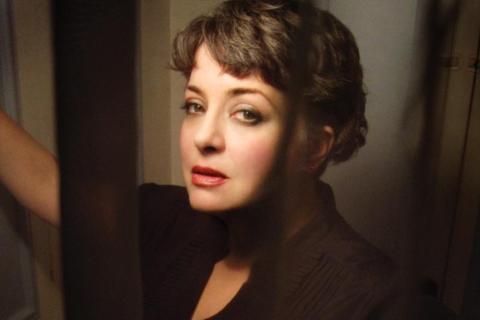 Anti- Records is proud to announce the release of Kelly Hogan’s extraordinary new solo album I Like To Keep Myself In Pain. This Atlanta native is a beloved figure throughout the contemporary music landscape, and a multi-faceted artist whose warm southern persona and powerful voice have left their mark on countless recordings and live performances. She was recently touted "a national treasure" by colleague, friend, and former Chicago neighbor, Andrew Bird, while acclaimed singer-songwriter M. Ward simply states, "Kelly Hogan rules."

On her new album, Hogan curates an ambitious and moving labor of love, mining the perfect intersection between classic pop, country and soul. She utilizes her incredible voice to interpret compositions penned for her by musical luminaries including Vic Chesnutt, The Magnetic Fields, The Mekons' Jon Langford, The Handsome Family, Freakwater's Catherine Irwin, John Wesley Harding, Robbie Fulks, Gabriel Roth, Robyn Hitchcock, and the aforementioned M. Ward and Andrew Bird. She is backed on the album by an all-star group of musicians: R&B legends Booker T Jones and James Gadson (Bill Withers, Beck), as well as talented young lions Gabriel Roth (of Daptone Records, The Dap-Kings) and Hogan's long-time collaborator Scott Ligon (of the newly resurrected NRBQ).

So who is this unique artist who has inspired some of our greatest songwriters and musicians to write for and play with her? Hogan is the consummate "singer’s singer" who has fronted a succession of highly influential bands. She has also collaborated with a list of prominent artists in a role she proudly describes as “the noble sideman.” Hogan's body of work and her considerable interpretive skills harken back to an era when a talent for personalizing the work of songwriters was a revered art form. “I love covering other people’s songs,” she explains. “To me it’s like putting on some incredible thrift store jacket and making it into something new. Sometimes you can find lovely stuff in the pockets of the song that no one has heard before.”

Hogan began singing as a child in Atlanta, and performed in bar bands while still in high school -- offering heartfelt versions of classics like “Stormy Weather” and “Trouble In Mind” -- but her creative trajectory was truly formed in her twenties in a ramshackle community of dilapidated Atlanta row houses called Cabbagetown. This rough and tumble neighborhood, built to accommodate Appalachian mill workers, provided cheap housing and a sense of freedom and camaraderie for the city’s impoverished creative community. ”It was a cheap place to live, so all the musicians and artists moved in,” she explains. “You would hear music coming out of all these cruddy little houses. There was scrappy punk rock, arty noise stuff, skronky free jazz, hardcore traditional country music, drag queen poets. Everyone played in each other’s bands. We were just in love with making music.”

Out of this landscape came Hogan’s first band, The Jody Grind -- purveyors of a unique and intoxicating mix of cabaret, country, jazz, and punk -- featuring Hogan’s soulful voice alongside talented instrumentalist-songwriter Bill Taft. “Bill and I met at a punk show,” Hogan says. “He asked what records I was currently listening to and I said Hoagy Carmichael. He said 'that's verrrry interesting!' A week later he asked me if I wanted to start a band and I said 'hell yes.'” The Jody Grind soon became torchbearers for the Cabbagetown scene, were heralded by R.E.M. singer Michael Stipe and released two influential albums before meeting an untimely end. Hogan followed with a stint playing guitar and singing back-up in the raucous rock and roll outfit The Rock*A*Teens before releasing a solo album of her own titled The Whistle Only Dogs Can Hear.

In a review of the record, All Music proclaimed Hogan “a talent to watch.” In 1997, Hogan relocated to Chicago and briefly attempted to quit music, but soon failed miserably. Within months she began singing as much as she could. “I became known as the person that could come in like a ninja and sing backup on your song and put my mustard on your bologna,” she says. “(Steve) Albini would call me for all sorts of things -- singing, screaming, you-name-it. At the same time I would get calls to come sing on shampoo commercials. I took on all kinds of projects because I felt like it was helping to build my musician muscles.”

In 1998, she joined the band of celebrated singer-songwriter Neko Case -- a venture she describes as "finding my family,” and, in the ensuing Chicago years, Hogan recorded and toured with a host of other top artists, worked at the legendary Hideout club, released two additional solo albums for Bloodshot Records, and embarked on a project for radio station WXRT where she recorded a cover song a week for an entire year. She also became one of three DJs for a popular WXRT show called "The Eclectic Company.”

“I’ve spent the last ten years singing with people I love and admire,” Hogan says. “Neko and Jakob Dylan, Mavis Staples and Otis Clay and Andrew Bird. I got to really stretch out musically with a weekly residency at the Hideout with my jazz quartet (Kelly Hogan and the Wooden Leg), and I even joined a kid’s music band on the side (Wee Hairy Beasties with Sally Timms and Jon Langford). I've always wanted to know music from all sides of the elephant, and I feel like I used everything I ever learned to walk into that Hollywood studio and work with Mr. Gadson and Booker T, Gabe (Roth) and Scotty (Ligon) for my first Anti- record.”

I Like To Keep Myself In Pain is a powerful and moving testament to Hogan's talent and years spent dedicated to music. And it is from all these accumulated experiences that she has selected a set of enchanting songs from renowned artists met along the way. She's sung with them (Andrew Bird, Jon Wesley Harding, M. Ward, Jon Langford), she's performed and recorded their songs (Jack Pendarvis, The Magnetic Fields, Vic Chesnutt), she's toured with them (Robyn Hitchcock), and some are inspiring friends and neighbors (The Handsome Family, Catherine Irwin of Freakwater). And in the case of one contributing songwriter, she went from fan to comrade of Gabriel Roth during the recording week.

The album was recorded at EastWest Studios on Sunset Boulevard in Hollywood -- in the same room where The Mamas & the Papas made “California Dreaming” and The Beach Boy’s created their masterwork, Pet Sounds. "It was a tiny and beautiful space. The room smelled like old tube amplifiers and wood,” Hogan recalls. “My amazing engineer Ken Sluiter knows me so well, and he knew it would be the perfect place for me to make this record.” The resulting album is that rare convergence of brilliant compositions, storied playing, and a singer at the peak of her powers.

Hogan describes the poignant and moving song “Ways Of This World,” penned by the late, great Vic Chesnutt, as the thematic “masthead” of the record. Chesnutt’s sparse and evocative lyrics are propelled effortlessly by James Gadson’s artful drumming, with a melodic guitar refrain repeating over Booker T’s mournful organ, as Hogan’s heart-wrenching vocals build to an echoing and powerful crescendo. “The first person to send me a song was my friend Vic,” Hogan explains. “I know him from Athens, GA and I've been a huge fan of his forever, but I was still afraid to ask him for a song. So, I drank two martinis to get up the guts to email him. When I first listened to the demo he sent I was just floored. I remember thinking, ‘How did he know my entire life?’”

A track that best captures the stylistic mix of the record is “We Cant Have Nice Things” written by Jack Pendarvis and Andrew Bird. It begins as a contemplative and soulful track and then swells into a soaring Charles Stepney-like vocal chorus. The song's pop, country, and soul elements converge in a powerfully classic way, while still sounding absolutely contemporary. “My dear friend Jack is a writer and sent me his brilliant and heart-breaking lyrics to ‘Nice Things’,” she says. “Based on the subject matter, he thought it might turn out like a George Jones she-left-me type of ballad. I had asked Andrew Bird to write me a song, and he wanted to know if I had any existing lyrics he could work with, so I sent him Jack’s. Then Bird sent them back a few weeks later set to this amazing music and the song became a whole different color."

The self-penned composition on the album is called “Golden.” Written by Hogan for her friend Neko Case, after receiving a pay phone call from a road-weary Case who was on tour. The resulting song tells of their enduring friendship -- their hopes and dreams. Hogan says, "It's a wish for Neko. We both know how hard it is to do what we do, but we both can't stop doing it."

Kelly Hogan’s new album I Like To Keep Myself In Pain is a musical tour de force that seamlessly blends elements of the past and present. From her time fronting visionary bands, to her role as a creative, nimble, and sought-after vocalist, Hogan's every performance and recording has led to this deeply personal and affecting work. "I had all these incredible songs sent to me by people I really admire, and I was working with legendary musicians in a holy-to-me studio space," Hogan says "And then my job was just to listen to what the songs were telling me to do. The song is my boss. Always has been. Always will be."