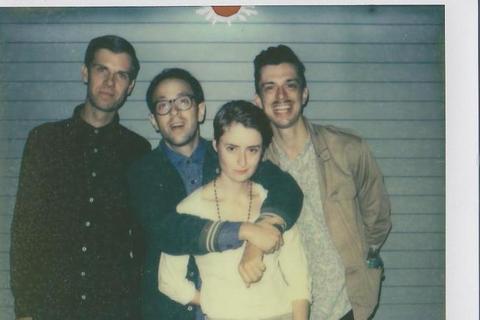 …"Now's the time for believing.." begins the chorus of "Born Again", the first single from DIANA. On a surface level, the song floats by on a cloud, the bass keeping you buoyed while the synths elevate you into an opiated trance. Digging deeper into the lyrics however, we find a story of struggle in a small town, small minded animosity, and the joy of triumph over adversity. With lush sounds and strong melodies, these songs entice the listener into a world that is deeper than its surface lets on.

DIANA is Joseph Shabason, Kieran Adams, and Carmen Elle. Paul Mathew has since joined to round out the live show. Shabason and Adams spent endless hours making music together since meeting at music school and used what was left of their time lending their saxophone and drumming skills, respectively, to many bands in their native Canada, including Shabason's recent contributions to Destroyer's Kaputt album and subsequent touring .

Taking demos that they'd written on a late August trip to a lakeside cottage, the two went into the studio with co-producer Roger Leavens. Carmen Elle came in to sing on a track. Both Kieran and Joseph had seen Elle perform in different groups and thought that her voice would add something special to the songs, a massive underestimation. Regardless of who wrote these lyrics and melodies, the songs belonged to Elle the second they left her mouth, each nuance of phrasing and melody deepening the sentiments put forth. With Elle’s lush vocals in place it felt right to give the project a life beyond the studio. DIANA was born.

There is something looming in the corners these songs, a pop sensibility is undeniably present, but never overwhelming. There is always enough room left for the imagination to complete the picture. Though you might hear echoes from times past, this music is definitely of a new school. DIANA comparisons defy eras; from Roxy Music to Toro Y Moi, from Style Council to Nite Jewel, from Sade to Twin Sister. This makes sense; though they're happy to be in this good company, for DIANA the point is pushing forward, and that they do.