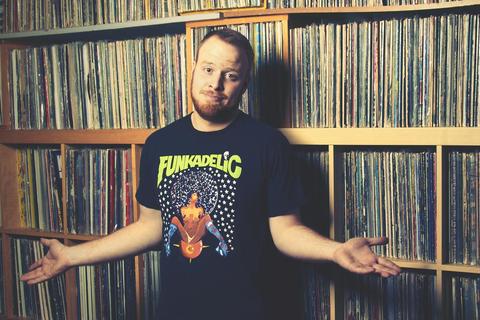 From his humble beginnings a decade ago as a teenager in Halifax- pumping out mixtapes from his bedroom and earning a loyal following already back then- Skratch Bastid has slowly been spreading his skills and name around the world. First at DJ competitions like DMC, ITF, and Scribble Jam and now as a certified hired gun for party-rocking worldwide and for his beloved remix work.
Increasingly recognized for his comfort and versatility in different styles – hip hop, funk, disco, club, rock, and just about every other genre that will make you dance – more and more people are getting hip to his style. That’s what keeps this Bastid working so hard. Touring city-to-city with a relentless drive, he’s wowed crowds from coast to coast in Canada, the United States, the Caribbean, Southeast Asia, Japan, New Zealand, Brazil and all over Europe as he averages close to 200 shows a year. For Skratch Bastid, all that energy is brought back to the studio and heard in his music.
As a producer, he takes that experience from the stage and lays it down on hard-hitting original music with a wide range of sounds. The formula earned him a Juno Nomination as Producer of the Year for his work on Buck 65’s Situation album, one he lost to none other than Joni Mitchell. You can hear his own music and remixes often elevate his live sets along with yesterday and today’s best.
His live collaborations with DJ Starting from Scratch and world-renowned beatboxer Scratch were a huge success that took them on a cross-country tour. With his ambassadorship of the widely-popular Red Bull Thre3styles competition, Skratch Bastid has traveled the globe teaching others his craft and playing with his peers. His latest mixtape The Entertainer and his slew of remixes in 2011 kept his popularity soaring on the web.
Now premiering his new live A/V show Skratch Of All Trades, a project almost two years in the making, the turntable champion and crowd favorite is taking it to another level and bringing his audience along for the ride. Having rocked the bar many times, Skratch Bastid is always ready to raise it.