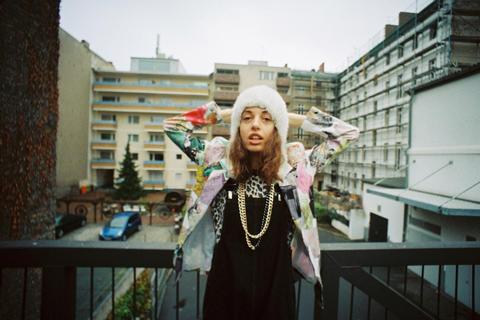 D E N A is Denitza Todorova, a Berlin-based songwriter and vocalist hailing from Bulgaria – the southeastern corner of the Balkans. Since moving to Berlin in 2005, she’s been seriously honing her self-composed beats and observant-yet-positive lyrical style. D E N A’ s been praised internationally for her unique and fresh flavor, making her an up-and-comer worthy of her recent attention.
By combining her own-world investigations with her firm stance on the importance of keeping it real, she’s asserted herself as a unique member of Berlin's creative scene. Since 2006, she’s been cutting and recording samples on her MPC and creating live visuals for various musicians. After being featured on two The Whitest Boy Alive records, she’s stepped out and into the spotlight with her juicy hip-hop, old school RnB and house inspired tracks, although her uncommon accent, laissez-faire attitude and 90s get-ups deserve recognition when it comes to her credibility.
Since the summer of 2011, she’s been performing for Europe's club scene, including support gigs for the likes of Das Racist, Icona Pop, The Whitest Boy Alive and LCMDF, before stirring things up at SXSW Festival last year in Austin, Texas (2012).
D E N A is currently putting the final touches on her debut album, together with Finnish producer Jonas Verwijnen (Kaiku Studios) and is famously known for her video single sensation of Summer 2012: “Cash, Diamond Rings, Swimming Pools”, which continues to climb in YouTube plays – now up to over 500,000.
D E N A’s first Single EP is released on the french label Kitsuné on January 28th 2013. It features the original version, as well as remixes by Berlin-based musicians Stefan Goldmann, Robot Koch and more.