The Harpoonist and The Axe Murderer 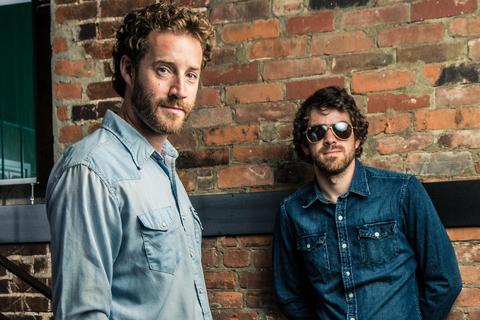 Listen to roll with the punches

‘With a name like the Harpoonist and the Axe Murderer, you might be forgiven for thinking that the Vancouver-based duo is some sort of concept group, based on a hypothetical love story between Captain Ahab and Lizzie Borden.’-- Chris Oke, Yukon News

In fact, The Harpoonist and the Axe Murderer is more like a sweaty fling between a sack full of harmonicas, a mess of foot percussion, and a very greasy Telecaster. Shawn Hall and Matthew Rogers say they’re making blues for a changing world, but a fan put it even better: this is ‘blues that gets you in the crotch.’

It’s also blues that gets rear-ends on the dance floor, while earning praise for its ‘decades-deep blues style’ (Scott Brown, What’s up Yukon). Combining the raw swagger of bands like The Black Keys and The White Stripes with a deep love for the roots of the genre, HAM reminds us that this kind of music was always supposed to talk to our nether regions. And if a lot of the blues made today seems a little limp, HAM finds its answer in the innovation that was at the heart of greats like Robert Johnson, Blind Willlie McTell and Muddy Waters. The duo has played festivals all over Western Canada, including The Beaumont Blues Fest, The Powell River Blues Festival, and The Gastown Blues and Chilli Festival. Along the way, they’ve shared the stage with some of the world’s finest blues acts, including Jim Byrnes, Dick Dale and MonkeyJunk.

You’re not supposed to pull this off with only two people, but early on, Hall and Rogers made the choice to limit their sound to whatever they could play between them, using only their mouths, hands and feet. Shawn Hall provides soul-tinged vocals and distinctly dirty blues harp, while Matthew Rogers simultaneously pours out throbbing drum grooves and guitar licks with the kind of coordination that usually spells ‘novelty act.' For HAM, the multi-limb workout is key to a sound that has to be earned: at a typical live show, it takes a matter of minutes for the pair to be drenched in sweat. HAM uses no programming, no pre-recording, and no looping. They could flash these kinds of tricks very easily; both Hall and Rogers work as studio engineers and producers, and between them they’ve amassed dozens of production credits on some of Vancouver’s best roots projects, including C.R. Avery, Mark Berube, The Fugitives, Sarah Macdougall and Dirty Bottom. Their willingness to get dirty pays off in the connection they have on stage: with only two people sharing all of the duties, the groove between rhythm section and vocalist is unquestionable.

Like any good romance or fling, the component parts of HAM weren’t always on an arrow-straight path towards each other. When Shawn Hall was a twelve-year-old living in Toronto, his grandmother gave him a harmonica and a book called, Harmonica for the Musically Hopeless. At the same age, but on the other side of the country, Matthew Rogers was falling in love with the guitar, spellbound by a counselor at his summer camp who could play ‘Under the Bridge.’ Their meeting wasn’t exactly promising, either. They met at a studio session for a radio jingle, recorded for a hole-in-the wall joint called ‘Jamaican Pizza Jerk.’ In between takes, the two bonded over the music they’d grown up on, eventually naming their new project for an odd moment in a classic tune. In Kris Kristofferson’s version of ‘Bobby Mcgee,’ Kristofferson sings, ‘I took my harpoon out of my dirty red bandana.’ The ‘harpoon’ is the blues harp, making Shawn Hall ‘the harpoonist,’ while Matthew Rogers plays the ‘axe’ (aka the guitar), to become the ‘axe murderer.’ The ‘death metal’ ring to their name may lose HAM some gigs at senior’s homes and community halls, but the band has made their peace with that. They are currently planning a Spring\Summer 2012 tour in support of their new album, Checkered Past. True to form, it finds HAM addressing classic blues themes like heartbreak, addiction, and lay-offs, and aiming it all straight at your crotch.

‘The Harpoonist & the Axe Murderer add a fresh take to the roots music genre via contemporary lyrics and arrangements, but maintain traditional structures and emotion. A welcome addition to the Canadian blues and roots music scene.’-- Holger Peterson, CBC Saturday Night Blues

The show at Friends on Thursday, March 14

9:00PM The Harpoonist and The Axe Murderer