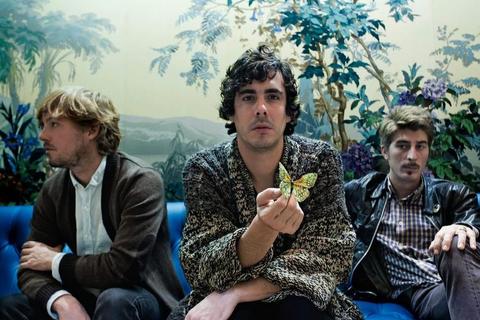 Cuchillo were formed in 2005 by Israel Marco and Daniel Dominguez in the city of Barcelona. Following their acclaimed debut ("Cuchillo"
Sinnamon, 2008), voted best national album of 2008 by Go Mag magazine and among the best albums of the decade by the national
magazine Rockdelux, Cuchillo embark on a lengthy tour. This takes them to the United States, the UK and Spain, where they share stages
with bands such as Radiohead, Black Rebel Motorcycle Club, Liars, The Black Angels, Spindrift, Carla Bozulich, Damon and Naomi, El
Perro del Mar, Faust, Low and Trad Gras Och Stenar, in cities including Los Angeles, San Francisco, Tucson, Portland, New York, London
and Brighton and the festivals FIB, Primavera Sound, Daydream, Wintercase, Festival do Norte, Clean Air Clear Stars (LA), CMJ Festival
(NY) and The Great Escape Festival (UK) amongst many others. At the end of the same year, the live show of Cuchillo is chosen as the 2nd
best nationwide by Rockdelux magazine, an honor repeated in 2010.
In 2010 they are signed by the label "Limbo Starr" with whom they release the EP "Duat" (Limbo Starr, 2010), voted Best Single of the Year
by magazine Rockdelux. Also in 2010, Henrik Agren joins the group, a keyboardist and guitarist of Swedish origin.
In June 2012 they release the second Cuchillo LP "Encanto" (Limbo Starr, 2012), which is received with great excitement by critics and
audiences. It quickly becomes established at the top of the music press charts. The Primavera Sound festival includes them in its 2012
edition, where they present their new album. Portishead select them to open their concert in Barcelona in the same month of June. In September they play at the Phono Festivalen in Norway with bands like Stealing Sheep or Pional. That was the begining of a tour that brings them through the US West Coast and Mexico before starting the"Encanto" spanish tour in fall.

The show at Red Eyed Fly on Friday, March 15