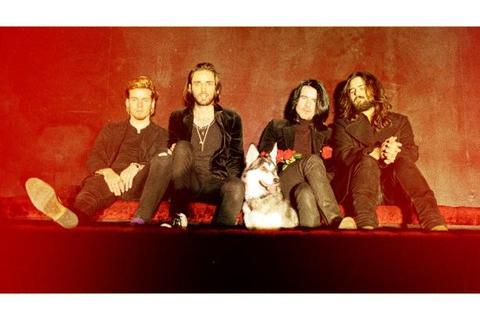 Kassidy are made up of Barrie-James O'Neill, Chris Potter, Hamish Fingland and Lewis Andrew and formed in summer 2008. The four members came together through house parties that took place in Hamish's flat in Glasgow where the boys would jam out covers and songs they had written late into the night.
Soon, the boys decided to make it all real and book a gig that Halloween. With the band now official they decided to move in together to Glasgow's Park Lane Studios.
Their influences range from Nirvana, The Rolling Stones, Free, Beach Boys, Roxy Music, The Doors to Wu Tang Clan. Each member brings his own unique influence to the band and when they blend together it creates Kassidy's original sound.
The band recorded three "Rubbergum" EP's over six months which led up to the release of their debut album Hope Street which was recorded with Thomas McNeice (Gang of Four) in Rubbergum Studios in Glasgow. The video for the first single, Stray Cat, was directed by Douglas Hart of Jesus and the Mary Chain and shot in Glasgow's West End.
With release of their first album, Kassidy toured sold out shows all over the UK which included a sold out show at The Barrowlands, Glasgow. The band went on tour with Primal Scream throughout the UK and played at a variety of major Festivals such as T in the park and Glastonbury.
With more songs piling up, the boys released their second album, One Man Army, in early 2012, which was recorded live over a week at Rockfield Studios in Wales. The title track One Man Army was the leading single from the album, and the video starred Craig Roberts from movie, 'Submarine'.
With the release of the second album the boys toured in Europe where they were invited to play at "London's Calling" Festival in Amsterdam.
Kassidy are currently writing and recording their third album in their home studio in Glasgow.