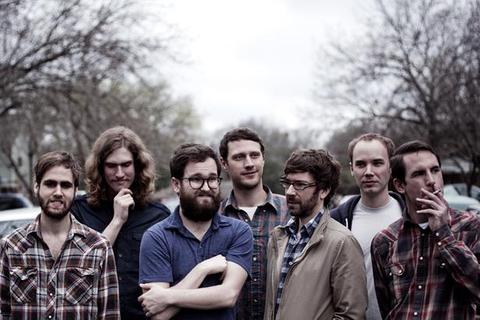 Listen to The Match

At times, it’s easy for The Eastern Sea to forget that Austin, Texas is home. While the band’s roots are firmly planted in the Texas Hill Country, their dynamic prose-pop travels from location to location, effortlessly moving between distant settings and their own, still somehow foreign, neighborhoods.

Created in 2005 as the bedroom project of songwriter/vocalist Matthew Hines, The Eastern Sea quickly released a self-produced anthology Further Up, Further In, which showcased Hines’ folk and electronic roots. From ‘07-’09, the band added several new members and recorded what would eventually become The Eastern Sea, a self-released collection of two eponymous EPs. Songs such as “The Snow” and “The Name” attracted the band’s first national press and led to several festival appearances (SXSW, CMJ, FPH Summerfest) and a pair of national tours.

Starting in 2010, The Eastern Sea began work on their first official LP, Plague, a project that marked a major shift in methods for band. Instead of piecing tracks together with home production, the vast majority of Plague would be recorded live to tape by Matt Smith (Ola Podrida, Golden Bear) at HOTTRACKS!!! in Austin. Ultimately, these principle recordings were a swan song for the long-running East Austin studio, as the complex that housed HOTTRACKS!!! was condemned by the city only a month into production. The Eastern Sea was then forced to finish Plague in between temporary studios and homes across Central Texas.

Despite the numerous setbacks, the completed Plague (WhiteLabBlackLab), mastered by Jeff Lipton at Peerless Mastering (Bon Iver, Andrew Bird), represents The Eastern Sea’s most cohesive collection of songs to date. Musically, it combines the hypnotic rhythm of post-rock, the playful melodies of traditional American folk, and the dynamics of contemporary progressive indie-rock, a distinct evolution of the sound that appeared on The Eastern Sea’s self-titled release. While ornate percussion lies at the heart of Plague, the signature slow builds of poly-rhythm in songs such as “Wasn’t for Love” and “The Match” serve as a launch pad for melodic bass, shimmering keys, finger-picked electric guitar, and expressive trumpet. Lyrically, Hines’ boldly present vocals weave a revealing autobiographical narrative, developing themes of change, transition, and powerlessness over the course of twelve songs.