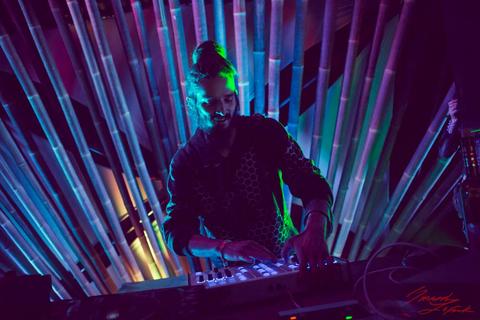 Far far away in deep auditory space, Heyoka has been abducted, cosmically mind probed, upgraded and reconfigured in an extra terestrial lab on a planet known as Marklar. Fortunately he has returned almost entirely unharmed, and now shall be known as the artist currently know as Andreilien….
Andrei Olenev first emerged as HEYOKA on the San Francisco underground glitch/bass scene in 2006. By 2009 he was touring extensively and quickly became a staple sound in the rapidly growing bass music scene of North America. With a constantly evolving, original style, he stood out amongst bass music producers as one who keeps the vibe going strong while venturing to explore new realms of sonic experience. Playing always live sets of his own original tracks, his music has been described as a journey through fractal soundscapes and alternate realms while riding the waves of fat glitch beats and earth rumbling sub bass.
Andrei has brought his signature sound to North American festivals including: Symbiosis, Sonic Bloom, Raindance, Lightning in a bottle, Big Bounce, Alchemeyez, and large Burning Man sound camps such as Nexus, El circo, Temple of Boom, Entheon Village, Roots Society and Fractal Nation. He has also played several international electronic music festivals such as Shambhala (Canada), Boom (Portugal), Earthfreq and Winter solstice (Australia), and Luminate (New Zealand). He frequently tours nightclubs and concert venues through the States and Canada, as well as internationally in Australia, New Zealand and Russia.
As Heyoka, Andrei released his first ep in 2008, and by 2011 had produced over six albums through San Francisco’s Muti Music, a leader in the glitch hop and bass music scene. In “Dub Iteration,” Andrei’s newest album and first official release as Andreilien, he revisits the dubby vibe of some of the earlier Heyoka releases with a newer fatter twist.
Further expanding artistic horizons, Andrei has been continually working to develop a multimedia project with original Visionary and 3D art to create full sensory fractal journey in a dimension of its own.
So, for a sonic journey so thick you can smell it, keep listening to signals from beyond for Andreilien playing in a noosphere near you…