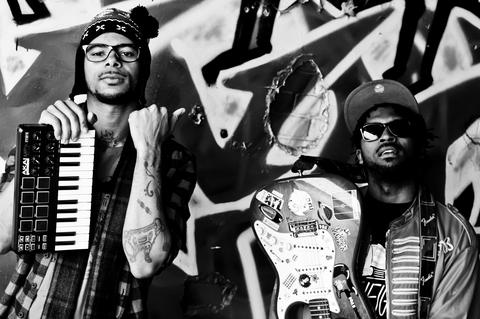 Ricky Fontaine and Walt Live are iNDEED―a fusion of rhyme and rhythm marinated in southern funk.

A former horn player from just outside Mobile, Alabama, Walt Live transposed his saxophone cool over to the piano's keys. He's been tickling melodies ever since. But his soulful sustain serves notice that the man still knows how to tongue a groove.

Hailing from Atlanta's Lakewood neighborhood, Fontaine was introduced to rock music late in life through the sounds of Jimi Hendrix. Then he picked up a guitar and let the spirit guide his fingers.

While individually playing the background as studio artists, the rapper-producers still made their mark.

Having produced Killer Mike's “God In The Building,” Walt Live is a respected beat smith and a regular at Dallas Austin's DARP studios.

As members of the 5 points music group with DJ Burn One and The Professor, the two have part of the machine laying anthems laced by artists such as Big K.R.I.T, Yelawolf, ASAP Rocky and more.

After months of jam sessions and knowing nods, Indeed is stepping out of the shadows.

The resulting mix is both familiar and unique. We've been here before, but not like this.

It's Cameo, it's Brick, it's Muscle Shoals, it's UGK, Future, Travis Porter and Kilo.

Country rap tunes is what it is, y'all. Turn it up loud in your speakers.

Come on up to the house Ricky and Walt built with walls of sound. Stay a while. Let that funk seep in 'til your lips curl and face balls up off the down-bottom dank.