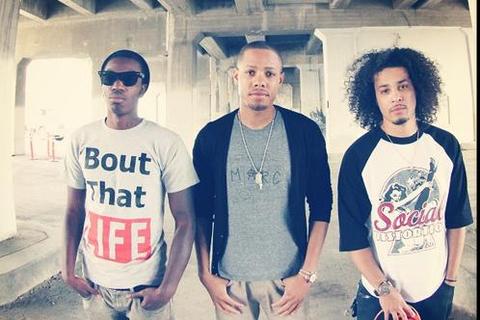 Revenge of the Nerds is a group/writing collective from Los Angeles, California that
consists of three members: David Randall, Kyle Coleman and Ramir Vincent. This
childhood trifecta grew up inspired by the music of their youth. Not long after adulthood,
the three friends separated and pursued individual music careers.

David signed to an independent label that landed him a nationwide tour opening for
major acts. Due to issues within the label, David’s debut solo project was never released.
Kyle signed to legendary writer and producer Cathy Dennis’ label. He has written and
produced for artists such as Jojo, Kevin McCall and Pixie Lott. Lastly, Ramir also
pursued a career writing and producing. In 2009 he landed a major placement on
Ginuwine’s album titled “A Man’s Thoughts,” which debuted number one on R&B
charts and number nine on the Hot 200. Ramir has since worked with artists such as
Gucci Mane, Day 26 and Bun B.

Though the group experienced successful careers independently, something was missing.
In 2011, after countless nights of hanging in the studio, David, Kyle and Ramir decided
to create a project together. They were influenced by their childhood musical inspirations,
including Pharrell, Blink 182, Dipset, and many others. With that, they created a new
sound unlike anything in the contemporary industry landscape.

It combines hip-hop, pop, rock and R&B. What began as a “just for fun” project,
garnered a lot of online attention once the group began releasing music for download.
Notorious hip-hop blogs gravitated toward the group in support of the EP, titled The
Evolution of Genre, creating a buzz surrounding the project. Blogs including Hot New
Hip Hop, 2DopeBoyz, AllHipHop, Emilio Sparks, etc. rallied for the release of the EP,
which received over 300 thousand views and 100 thousand downloads. Major producers
like The Costars and Brian Kidd caught wind of the group.