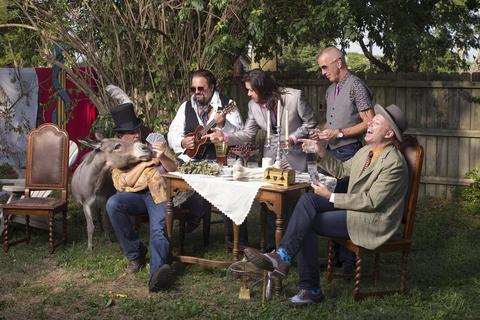 The Mavericks are back. The country-steeped garage band with a Cuban American lead singer, emerged from Miami with their sultry debut that was equal parts innocence, intensity and vintage influences. But time has a way of melting when you’re busy living life – and two decades has passed since their polyrhythmic brand of post-modern country has given the world “All You Ever Do Is Bring Me Down,” “Here Comes The Rain” and “Dance The Night Away.”

With their new album, time melts once again and the band that defied definitions, blurred genres and made everybody feel good, is back. The "most interesting band in the world" has captured the infectious energy and robust sound from their LIVE shows on their first release on The Valory Music Co., IN TIME. Whether it’s the Buck Owens-influenced “Dance In The Moonlight,” the panoramic Orbison-esque “Born To Be Blue,” the horn-punctuated retro noir “Back In Your Arms Again” or Tejano-esque “All Over Again,” the Mavericks have once again found the way to make soul music and sole music.

For Malo, the lead singer with the rich supple voice that’s second to only Roy Orbison in its ability to convey lonesome, desire and vivre; drummer Paul Deakin and multi-instrumentalist Robert Reynolds; as well as longtime collaborator keyboardist Jerry Dale McFadden and seasoned guitarist Eddie Perez, life has made them richer in terms of experience, playing acumen and a sense of their own musicality. It has also deepened the connection between them in a way that heightens the singular chemistry that made the Grammy-winning band one of the most exciting live propositions in any musical genre.

“Maybe the space has given us a sense not of how, but more what can happen when we come together,” says Deakin, whose spent the years apart balancing master-level carpentry with touring with David Mead and Jason White. “Just being there, and experiencing it, you don’t think about it. But there is definitely something when you get Raul, Robert, Eddie, Jerry Dale and I in a room that’s more…"

Ironic, since other than a disjointed album seven years ago, the Mavericks had gone their separate ways. Through happenstance, serendipity and a collective convergence of the cosmos, the band members found themselves entertaining the notion of some live shows for major festivals, then the idea of recording emerged.

Seven years had passed; they’d barely spoken, hadn’t been in the same room. Hadn’t given the band more than a passing thought, because what’s done is done.

But the Mavericks had never been conventional. Indeed, with the passage of time, their legend grew – and wherever the principles went, the question of reuniting seemed to grow exponentially.

“I’d always dismissed the people who asked (about The Mavericks) as just holding onto the past,” laughs Malo. “A moment in their lives, some notion that was more fantasy than fact. But the years past, I kept making music and it never died – those questions.”

“Finally, a friend was visiting family in Virginia, a year or so ago, and they were sitting close enough to the bandstand, the players heard them talking about us. Without saying a word, that band played three Mavericks songs without missing a beat. When does that happen?”

So the man who feared re-treading what was and diminishing the potency of the multiple CMA and ACM Group of the Year’s legacy began to rethink whether there was more music to be made.

“It’s funny,” says Perez, whose made music with Chris Shiflett of the Foo Fighters, Dwight Yoakam, Miranda Lambert, George Straight, Lee Ann Womack and Raul as a solo artist. “It was maybe to some dates, then sure let’s do it -- and then what was a few shows turned into, ‘Hey, maybe let’s make a record.’ It just snow-balled, because I think every one of these guys lives to make music, and together, they all know they’re like nothing else.”

“I expected everybody to play their asses off,” Malo confesses. “That they’d step in like men, and make music. And they did. And then some.”

What Malo doesn’t say is that the band did zero pre-production. He was on tour in Europe. Other band members had commitments. Given that they were more “let’s see what happens” than locked in, it was decided to show up and see what happened.

Harvesting a sea of influences – from Dean Martin to ZZ Top, Merle Haggard and George Jones to tangos, polkas and Ravel’s “Bolero” – this album was as bold as it was exciting to record. Or as Perez laughs, “It’s so many genres… if you had to call it something, I guess it would have to be ‘inclusive’.”

“I think it took 30 seconds,” Malo says of the band’s inherent chemistry. “We started playing, and it just happened. It was that explosion of sounds! There’s this beautiful simplicity to this, because we did fall together in some ways, but there’s deceptiveness to it, too – because when we play together, we know each other so well.”

“There was a sense anything could go wrong at any moment,” Deakin concurs. “So there was this immediacy – and this notion of really being ‘in’ it. Raul didn’t let us hear the songs on purpose, so we were all really listening, really paying attention because we didn’t know what was going to happen."

“Figure TRAMPOLINE was a massive live production,” the drummer continues, lining out the band’s history album by album. “MUSIC FOR ALL OCCASIONS, that was us recording in the basement of Sony Publishing. And CRYING SHAME was our first real recording session in Nashville with major producers. FROM HELL TO PARADISE was really the raw us," said Deakin. "IN TIME feels really, really good. Like when we were making music in the warehouse back in Hialeah (FL). In the end, we went all the way back: we’re like a garage band behind that voice.”

For all the polish and sophistication, sold out shows at the UK’s Royal Albert Hall, cultural blurring and tours of Japan, South America and Europe, United States and Canada, The Mavericks are, indeed, a post-punk band with deep retro-fittings from Miami’s indie scene. That existing beyond the lines is why the lush ‘50s stroll of “That’s Not My Name” is as comfortable for the lil ole band for Calle Ocho as the jukin’ “As Long As They’re Lovin’ Tonight,” the stoic tenderness of “In Another’s Arms” or the epic build-and-recede “Call Me When You Get To Heaven,” featuring the legendary McCrary Sisters, which went down in one take.

“I see this as a record everyone’s invited to,” Malo explains. “It’s a mix of different rhythms, different places and times. From rednecks to Cubans, Mexicans to gringos to WASPs, you can imagine this band pulling into a country festival and playing ‘Dancing In The Moonlight'” – and everybody dancing.

“It’s taking people to new places, but knowing it’s all one world.”

“We constantly struggle with the definition of mainstream,” explains Reynolds. “There were moments obviously when we were ‘in’ it, but it’s more the mainstream embracing us from where we exist on the musical fringes. But rather than being something we’re not, we’ve always stayed true – and by being square pegs, we also probably reflect America, because America’s roots are a melting pot.”

“Raul’s ability to write a simple lyric,” Deakin reflects, “reflects the mass of humanity, even though it’s one man. When you add his voice, and that sense of melody, it moves people.”

Certainly “Tonight Is The Night,” with its climbing melodic escalation and unabashed brio, is as seductive as country’s been in years, while the B-3 and mariachi "Amsterdam Moon" celebrates the sensual jolt of being alive in the unseen details. Even the spaghetti Western “Come Unto Me” ripples with drama and the squat horn parts as Malo’s voice grows bolder and more epic in its bravado and command of carnality.

Keyboardist Jerry Dale McFadden, who started with the band in '93, says, "The new music stands for real music, a magical vibe that happens when we play together. You don’t recognize that our work was labored over. No, instead, we make it look like its music that we just started playing." McFadden believes IN TIME will be applauded by old fans and will likely attract younger audiences as well. "We just made a great record, and there are plenty of folks who will discover this for the first time and discover the vibe, that this is something fresh. What was old is new again."

“This is a very masculine record,” Malo says with vast understatement. “There’s a little bravado in there, I’ll say that. It’s the bullfighter with the flower in his mouth, but it’s also about men… and women… and how different we are, but how much we want and desire each other. Kind of quit with the understanding, and let’s get back to being what we are.”

Getting back to being what we are underscores everything about The Mavericks return to form. The ferocity of their playing, the singularity of their intent – and yes, the copious sense of exuberance that infuses every note of the album.

“Our relentless pursuit of fun and our selfish notion of pleasing ourselves has always driven us,” Deakin concedes. “But pleasing ourselves creatively has also always worked for us, created an immediacy that makes us true to the songs. We don’t create for a niche or a genre, but to capture the spirit – and that’s always been our strong point.”

“When we were the new kids, there was this excitement,” Reynolds continues. “Maybe even a naiveté that came off as brash, but we were always sincere. We were never trendy, because we weren’t chasing anything. Maybe we were rebels because we were different… But I think people realize now, this is who we are, what we do. It’s not hipster, it’s who we are.”

“The fans have always understood us," says Raul. "We made them feel good – and that was something then, as now I think, people wanted. Life is so serious; even for a moment, let’s forget and enjoy!"

“That’s one of the best part of this label, Scott (Borchetta, Big Machine Label Group CEO) understood what makes us what we are. He was there when we were happening, and he was very supportive! No one at the label wanted to put hand cuffs on us, they just wanted a Mavericks record… and I think we gave them one.”