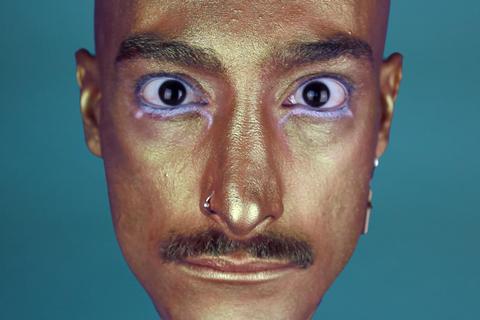 "It really is an amalgamation of all things trippy and offbeat. I've listened a dozen times now and each time I find another little sonic nugget tucked between the crunching beats. It's like The Adamski Kid made music out of a piece of abstract art." We Are Hunted

"The Adamski Kid pulls you into his world and covers you in layers of distorted electronics, anomalous vocals and a seamless film of beating melodies. The end result is a a finely tuned and satisfyingly danceable piece of noise-pop brilliance." This Town Is Folly

The Adamski Kid is the musical incarnation of East London Songwriter/Producer Adam Karayiannis.

The next single 'Je Veux Une Cassette De Bowie' will be released March 25th through Avant Garde label 'Lo Recordings' that have previously housed Grimes, Aphex Twin and Fisherspooner in the UK.

A winner of Sideline Magazines 'Face The Beat' Competition within a week of posting his debut track 'I Dance Alone' online, he cites some of his musical influences as Kate Bush, Crystal Castles, Bloc Party and Joni Mitchell.

The Adamski Kid promises an eclectic debut, where each beat, layered backing vocal and sound effect is seamlessly merged to create a relentless soundscape that is completely encompassing and draws you utterly into his world.