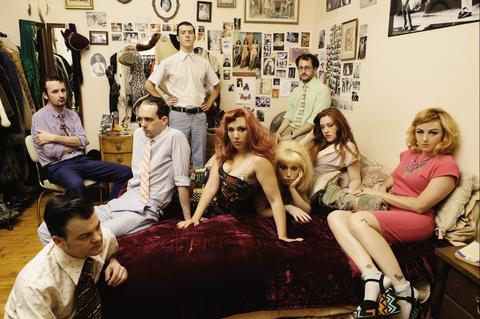 Power diva Clairy Browne and her harmonising girl group The Bangin’ Rackettes formed in 2009 over a mutual love of nineties dance videos, early rhythm n’ blues records and big hair. They teamed up with a group of lovable rogue musicians and started rehearsing and recording in a barely standing ex-coffin factory in the suburbs of Melbourne, which quickly became the musical home to this young band.

Together they have come a long way and have been bringing back the big stage show to venues and festivals all over the country with highlights including touring with the Big Day Out, playing the Forum Theatre for Melbourne Festival, appearances at Golden Plains and Falls Festival and many late night sweaty, sequined club shows along the way.

The band’s sound takes you through their original interpretation of soul, jump blues, doo-wop, ska and r’n’b, while telling a story which is very much about the here and now. Their live show is an experience from start to finish, often starting with a marching band playing outside the venue, processions through the room and cameos from other singers and dancers performing from within the crowd. These dynamic and energetic live shows are created with the intention of taking their audience to another place, with their contemporary take on the heightened hysteria of 1960’s music TV.