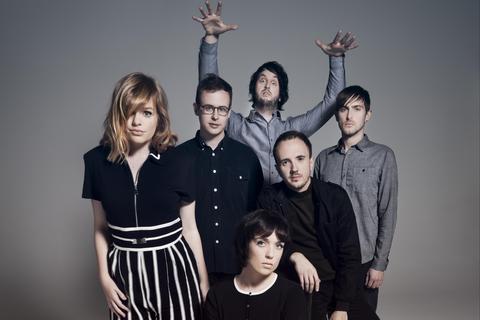 Adding colour to Melbourne’s musical landscape, Alpine formed in 2009 and have gone from strength-to-strength ever since.

Fusing synths with honeyed harmonies, hypnotic rhythms and bright beats, Alpine appeared on the scene with a set of demos that quickly caught the attention of music lovers across the country.

2010 saw the release of their debut EP Zurich which featured the singles ‘Villages’ (no 2 most played on JJJ radio) and ‘Heartlove’ (top 10 of most played on JJJ), and had fans and critics alike clamouring for more from ALPINE.

Next came the release of their single HANDS in 2011 (nominated for an ARIA - best music video), followed by GASOLINE (no 1 most played on JJJ). These being the first cut's from their debut album released on Ivy League Records in August 2012 (nominated for J Award, Album of the Year).

A Is For Alpine debuted on the iTunes chart at #1, a spot they held for 2 days, an Aria chart debut of #11 and subsequent double sell-out shows in Syd, Melb and Perth!

Since forming, Alpine have toured with the likes of Kimbra, Sia, Cloud Control, The Jezabels, The Naked And Famous and Matt Corby to name but a few, and have graced Australian festivals across the country including Splendour In The Grass, Southbound and Falls Festival.

ALPINE recently inked a deal with Votiv Records for the USA release of the band’s debut album “A Is For Alpine”. Fast building a name for themselves as a force to be reckoned with, the Votiv roster also includes We Are Augustines, Gaz Coombe (Supergrass), Imagineray Cities, and Cloud Control, amongst others. A Is For Alpine is set for a USA release in 2013.