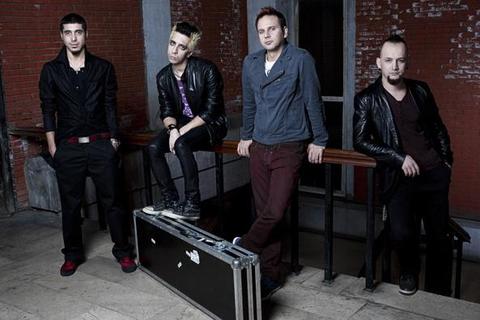 Listen to FLY TO STAY ALIVE

maNga is Turkey’s foremost progressive nu metal rock band. Their electronic sound elements, Anatolian traditional music, hip hop and rock mix is famously recognized throughout Europe. Formed in the year 2001 as an underground club grudge band in Turkey’s capital of Ankara, (closely compared to the Seattle music scene) the band stepped out of the garage and into the public spotlight after Sing Your Song Music Contest which resulted in a contract with Sony Music and the move to Istanbul.

The band released their self titled debut album “maNga” in 2004 which immediately became a mass hit in Turkey and surrounding countries, toping the charts and nabbing a Golden Record award. Released as well in Japan, the album shocked the charts prompting EA Sports FIFA to use the song “Bir Kadın Çizeceksin” as their computer game soundtrack. 2006 saw maNga album’s extended edition re-released as “maNga+” including a feature DVD and new singles.

Second full album “Şehr-i Hüzün” followed in 2009 and blasted the charts even more then the first as the band was awarded Best Turkish Act from MTV Turkey and Best European Act award at the MTV Europe Music Awards that same year. In 2012 “e-akustik” album was release to rave review of a different audience. The eclectic acoustic project broadened maNga’s fan base and established their name as a strong force in the music community; radio and television stations rallied to have the band perform acoustic sets with live stream.

maNga continues to rock their audiences both onstage and off. They have won over 200 world recognized awards in over 25 countries and placed 2nd over 50 international entries at the Eurovision Song Contest 2010 in Oslo, Norway with their first English single “We Could Be The Same”. In 2011 their second English single “Fly to Stay Alive” aired on MTV European channels and skyrocketed to #1 on the MTV Adria Rock Chart and Top 20’s Chart. The single has since been used for DSmart Satellite TV featuring athletes such as the LA Lakers and Manchester United.

A group of rough, passionate, music loving boys from a dirty city in the middle of Turkey, this band has bridged the gap between languages and are grateful for fans based in countries such as the Netherlands, Germany, Russia, Australia, Canada and Japan. maNga is pure rock and roll reminiscent of the good old days.