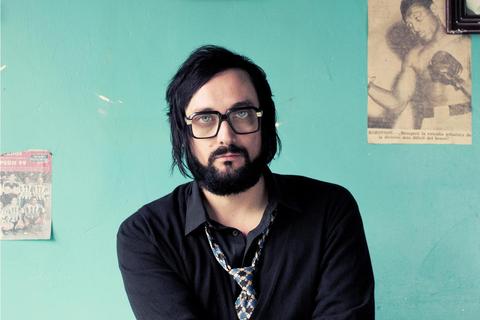 BLAUDZUN - HEAVY FLOWERS
Critics consider him one of the best kept secrets in European indie
pop. But that won't be for too long. Holland based singersongwriter
Blaudzun will make his debut in the US. Set for release
in January 2013, Heavy Flowers (Krian Music Group/V2 Benelux) is
Blaudzun's most dynamic LP to date, in which his remarkable
voice, haunting melodies and dramatic string arrangements
coincides with a love for folk and art rock. With this third collection
of songs Blaudzun again surpasses his previous work. Blaudzun made
his US live debut at CMJ Music Marathon in New York (October 2012)
and is officially selected for SXSW 2013.
MTV Iggy:
"It pretty much encapsulates that strong, goosebump-inducing indie rock mood of
2004 when Arcade Fire dropped Funeral"
Oor Magazine:
"Incredibly beautiful."
NRC:
"One of the most ambitious records of Dutch origin. Rare emotional depth."
Indiefuzz.com:
“Blaudzun: a genius in disguise”
Diskant.dk:
“Blaudzun puts the Netherlands on the European musical map”
Ever since the release of his debut album in 2008, singer-songwriter
Johannes Sigmond goes by the name of Blaudzun. He surprised music
fans and critics, and received rave reviews which he even surpassed
with his second album Seadrift Soundmachine (2010). The widely
acclaimed album and subsequent live shows caused his definite
breakthrough in the Netherlands. His music has been likened to indie
pop and folk rock and is aesthetically compared to Arcade Fire as well
as to Ryan Adams and Antony & The Johnsons. The various
comparisons show that it is difficult to stick a label on this man.
Blaudzun toured Europe this summer and fall including
Reeperbahn Festival, Lowlands, Dranouter and BootBooHook and
made his US debut at CMJ Music Marathon in New York. Blaudzun
is selected for SXSW 2013.
De Volkskrant:
"At times monumental album."
Nieuwe Revue:
"A record of constant high level. Each song contains vocal lines to cherish."
Kristianstadsbladet.se:
“Beautifully arranged”
De Standaard:
"Pretty staggering, overwhelming pop."
2012 - present
Heavy Flowers was released in The Netherlands, Belgium, Germany, ad
Scandinavia earlier this year and hit number 4 in the Dutch Top 100
Album Charts in the first week. Critics and music fans have labeled his
third record as a stunning and incredible successor.
Blaudzun and his fellow musicians (including his brother Jakob
Sigmond) made big impression at Eurosonic/Noorderslag 2012 and
sold out their entire club tour in advance.
Single 'Flame On My Head' became an instant classic on Studio Brussel
(Belgian national radio) and hit both their Hotlist and the prestigious
Afrekening charts. In March Blaudzun was nominated as Best
Alternative for a 3FM Award (Dutch national radio). In September
Heavy Flowers received the Dutch Public Broadcasting Award for
Album of the Year 2012.
2010 - 2011
Blaudzun made big impressions at the big summer festivals in
Holland, including Into The Great Wide Open and Lowlands. He ended
the year with a sold out club tour.
2009
In September 2009 he finished recording Seadrift Soundmachine (V2
Benelux) during sessions with The City of Prague Orchestra, known for
its filmscores (Das Leben Der Anderen, and David Lynch’ Lost
Highway). Blaudzun again wrote most of the songs in his beloved
Barcelona and recorded in different studios in the Netherlands and
Prague.
2006 - 2008
Johannes Sigmond (Arnhem, Netherlands - 1974) played for years in
various bands and projects before he continued as a singer-songwriter
in 2006. Named Blaudzun, called after a relatively unknown Danish
cyclist from the 70s, he works in 2007 on a special song collection of
songs, originally intended to be a soundtrack for a midnight car drive.
He heads south to Barcelona to work on new material. In his residence
near Amsterdam he records most of the songs in a small bedroom,
added with sessions in several studios in the Netherlands and hotel
rooms in Barcelona, Spain.
Blaudzun toured the Benelux states in 2008 including Metropolis
Festival and supported Norwegian singer Ane Brun and Mark Eitzel's
American Music Club.
For touring dates and details go to www.blaudzun.com