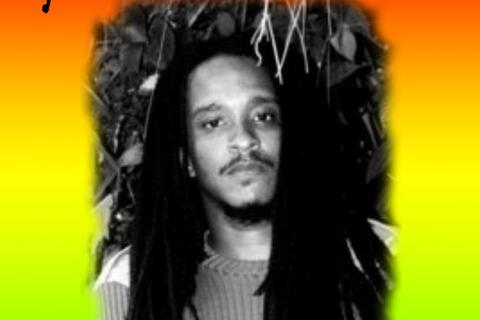 Tony ‘Raspyek’ Joubert is the first rasta poet to arise from the Seychelles islands also with a new form of poetry (bling bling poetry).

Blending music with his poetry makes his work more interesting, on the other hand while doing the accapella he moves the audience with his powerful tone.

Raspyek was born in Beirut, Lebanon on 03/01/77.
He was sent to Seychelles at the age of 5 months where he was adopted.

It was there that he adopted the name “Pyek“ a nickname of his late adopted father. As most children who had been brought up by foster parents, Raspyek is no exception he lives a very simple life.

“Simplicity not poverty” as he explain in one of his creole poem entitled “Mwan, mwan, menm-I myself”
Rose by a religious family, that he became an altar boy until he realized the power of Rastafari within himself. Immediately he started using poetry as a medium for his message.
Surely he must have been inspired; yes he does recall when one of his friends lent him one of Mutabaruka’s cassettes.
There he started dreaming about being a big poet, with the inspiration of Mutabaruka and of his Seychellois friend and poet, Justin Valentin. However, it was not until 2001 that he staged a performance.

From then, he has been performing in different shows, official openings, charity shows and children shows and activities.
He managed to produce his first poetry album in June 2011 entitled “Poetik”.He is currently working on his second album.

Also performed three times on reunion islands for slam poetry festival where he manage to meet n rub shoulders with many giants in the world of poetry
(Comorade Fatso from Zimbabwe, Mark Smith from America, Omar Mussa from Australia and numerous poets from the region and from Africa)
Participated in Island unite festival in Mauritius where he was the only poet in a Reggae show.
Has released one poetry album entitled “Poetik” in June 2011

Listening to politician & religious preachers, learn as much as I can about black history.
All are elements that make me a living poet.
With my Bling, Bling sound surely it will catch your attention.