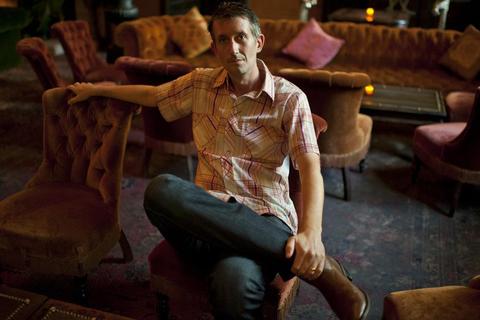 Listen to The Night Before The War

Ronnie Fauss grew up in the brutal Texas heat where 95 degrees often constitutes a nice night, and where a man may seek relief through the nearest watering hole or under the chords of a freshly-tuned guitar. Possessing a unique voice in the alt-country vein seamlessly stretching towards moments of Americana and folk, Fauss is both optimist and realist, chasing his dream girl down a long dirt road and lamenting the struggles of his friends and neighbors, which serve as a microcosm for the country at large.

The Dallas-based singer-songwriter announced his arrival on the scene with a string of EPs in 2009 & 2010 (New Songs for the Old Frontier, I Can’t Make You Happy, Mulligan) that provided rough sketches of an artist stomping around in space until solid ground appeared beneath his feet. On I Am The Man You Know I’m Not, a gifted bare bones storyteller has emerged, singing in warm, personal tones accentuated by flourishes of electric guitars, fiddles, organs, and steel guitars.

Baring the influence of John Prine and Steve Earle, Fauss’ songs excel with a remarkable economy of words and poignant, catchy hooks. The sparse, pastoral duet with Lilly Hiatt on Gram Parsons’ “Sin City,” an homage to the legends of Fauss’ sub-genre, is tempered by the uptempo, Neil Young-channeling “The Night Before the War.” Whether wandering around broken-hearted (“I Don’t See You”) or at relative peace (“Pistols in the Air”), Fauss eschews the whisky-guzzling country bad boy façade in favor of the genuine article.

Recorded at BnG Studio in Nashville alongside producer Sigurdur Birkis (drummer for Will Hoge), I Am The Man You Know I’m Not is an 11-song testament to how far the alt-country sound has traveled from the classic Wilco and Uncle Tupelo records of the 90s. Fauss’ narratives explore present tense perils and the requisite hope for tomorrow, all while acknowledging that things could fall apart at any moment.