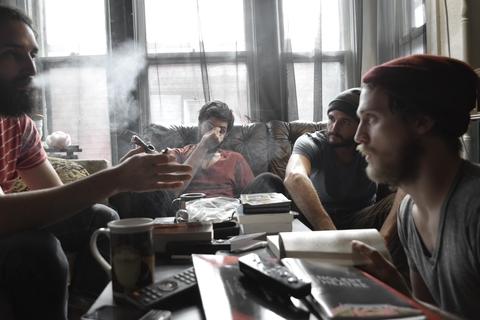 Cartright, forming originally in Denton TX summer of 2006, is Ben Cartright (guitar, vox) with brothers Louis Cornetti (bass), Nick Cornetti (drums) and Joe Cornetti (keyboard). They have been building and destroying their punch drunk melodies for over half a decade.
After releasing their 5 song EP, "A Tall Tale Comes of Age" (2006), they relocated to Austin,TX and spent the past 5 years crisscrossing North America. In July 2011, they released the single "Jass Song" on 7" via Pau Wau Records. Their unique blend of weird rock and roll has allowed them to share the stage with bands such as Roky Erickson, White Denim, The Toadies, The Black Angels, Sparta, Reggie Watts, Helmet, Wavves, Mariachi El Bronx, Cold War Kids, Two Gallants, Andrew WK, Dan Deacon, Deerhoof, The Strange Boys, and many other notable bands. They are currently recording their full length (yet to be released) with Austin based producer Chris “Frenchie” Smith (Jet, Toadies, And You Will Know Us By The Trail of The Dead).

"Cartright deals in the rawest of raw emotions...packs the kind of punch that leaves you choking and
smiling." - DAYTROTTER.COM

"rough-and-tumbling folk-rock that would make South by Southwest crowds salivate...perfect touring companion for the likes of Black Mountain or Akron/Family." - DALLAS OBSERVER

"the band’s shows feel more like tent revivals than rock shows, with a healthy quantity of whiskey in place of holy water." - AUSTINIST.COM

"Cartright - with it’s yawing sea shanties and hoarse, chorus-of-the damned-bark-alongs is what pirates and murderers use to lull themselves to sleep." THE ONION / AV CLUB