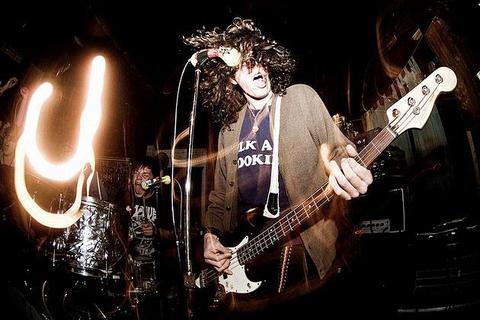 Japanther is an art project established circa 2001 by Ian Vanek and Matt Reilly while attending Pratt Institute in Brooklyn, New York.
The duo have often been known to collaborate with a variety of artist including but not limited to: Penny Rimbaud, Dan Graham, Eileen Myles, robbinschilds, Dawn Riddle, Claudia Meza, Ninjasonik, Anita Sparrow and Spankrock.
Japanther was featured in the 2006 Whitney Bi-Ennial as part of the Don’t Trust Anyone Over Thirty puppet rock opera.
Japanther have since made a name for themselves in unique performance situations. IE along side synchronized swimmers, a top the Williamsburg Bridge, with giant puppets, marionettes and shadow puppets. Out of the back of a moving truck in SOHO, with giant dinosaurs and BMXers flying off the walls.