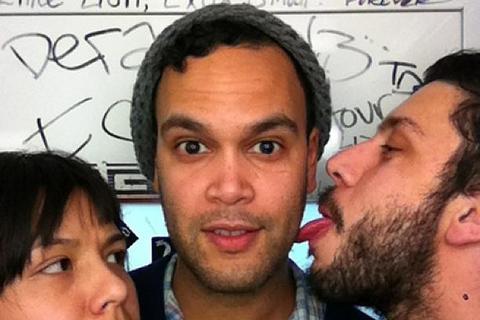 Listen to Bet The Farm

louis logic splashed onto the indie rap scene "party foul" style in 1999 with the drinker's anthem "Factotum". He spawned a laundry list of collaborations with artists like Jedi Mind Tricks, MF DOOM, Malik B of the Roots, and Travie McCoy. His 2003 debut Sin-A-Matic cemented him in listeners' minds as a standard for dark romantic comedy and shock rap. Louis' taste for musical exploration grew with the release his most mature record to date, Misery Loves Comedy (2006), on which he officially partnered with longtime producer J.J. Brown. It was then that Louis executed his most mysterious and adventurous move yet, retreating into monastic seclusion to study voice, piano and music theory. When he emerged, it was touting a new Copenhagen, Denmark based live Surf/Hip Hop/Balkan fusion band, Spork Kills, which he debuted with the Beaches Love US EP (2009) featuring the video that garnered his first MTV exposure, "Night of the Hip 'N Dead". He continued to tour worldwide throughout the United States, Canada, Europe, Asia, Australia and New Zealand, cultivating a theatrical live show that managed to amalgamate rapping, singing, piano playing and even stand up comedy. After 7 years of radio silence, music study, extensive touring and artistic exploration, Louis will follow up his 2006 record with his first self-produced album on progressive indie label Fake Four Inc. Titled "Look On The Blight Side", it's a rap record written in an indie pop, singer/songwriter style, completely sample free, with original arrangements written and played by Louis. This dark collection of songs gives fans a revealing look into his long journey of self discovery. Louis takes to the road beginning in late winter of 2013 to start sharing songs from the new album live in preparation for his summer release. Check out the first shared song from the album, "A Day Late And A Dollar Short" at www.fakefourinc.com now.