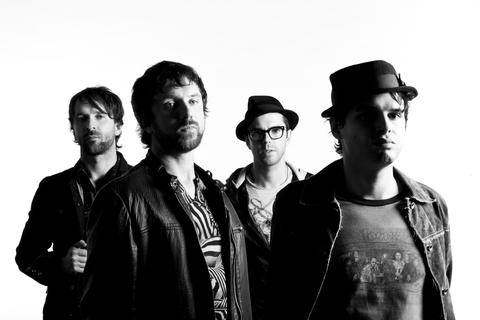 By the beginning of 2010, the Trews were feeling a little lost.

The band had been on an upwardly mobile streak since “Not Ready to Go” first came pumping out of Canadian radio back in 2003. They wasted no time piling success on top of success, watching their stature grow with multiple hit singles and an incomparable live show, courting exhaustion while they fanned out across the world and carved an eccentric and stubborn path through an industry demanding that they always “compete.”

The tensions were audible on 2008’s No Time for Later. The band’s third album was its most accomplished and satisfying. But as a formal exercise in broadening their songwriting chops while making a hermetically perfect studio recording – all while shoveling enough hits into the mouth of the beast – it emerged uptight and dark, maybe even a little claustrophobic. Not insignificantly, the second single was called “Paranoid Freak”.

As the first leg of touring wrapped up on their sidelong 2009 Acoustic – Friends & Total Strangers retrospective, for the first time in years the Trews found themselves facing time off and a blank canvas. As Colin MacDonald bluntly puts it, “We didn’t really know what to do.” The rest of the tour was months away. The band had forward momentum but nowhere to go.

Enter Gord Sinclair. The Tragically Hip bassist surfaced amidst this rare period of suspended animation and offered the Trews a little shelter at the Hip’s fabled Bathouse Recording Studio. He said they could cool their jets, make some demos. “And I’ll hang out for a couple days, drink some beer, and listen to what you guys have got going on,” he suggested. It sounded like a holiday to John-Angus MacDonald.

“We were just looking to run away a little,” the guitarist admits. “And we wanted to do something fun, organic, be a band again, and fuck the consequences, all that stuff.”

And so bassist Jack Syperek, drummer Sean Dalton, and the two MacDonald brothers faded into the bucolic splendor of Bath, Ontario, where they had so much fun and fucked so many consequences that a couple months later, the Trews had a new album – Hope and Ruin. Or maybe it should be called Order Out of Chaos.

In any event, the band insists that it all happened by accident, or “guerilla style,” in Colin’s words.

“It was like anything was up for grabs,” continues John-Angus, “And we just needed to get a hold of where we were at, which is why we retreated to Bath. We went there to try and figure out what kind of record was in us.”

So what kind of record was in them? In contrast to the cinched, vaguely political alt-rock of No Time for Later, the Trews swing low and loose on Hope and Ruin, which Sinclair unexpectedly found himself co-producing with John-Angus. Their customary wall-of-guitar is there on tracks like the explosive and somewhat insane “People of the Deer” – albeit bigger and more visceral than ever – and “The World I Know” puts a perverse twist on the kind of Aerosmith redux the band accomplishes in its sleep. “I’ll Find Someone Who Will” is their patented classic-rock, power-pop hybrid, and naturally more fun than a sugar rush after a blast of nitrous.

But title track and single “Hope and Ruin” is something altogether different, superimposing chiming guitar and Colin’s reflective-yet-triumphant lyrics onto a pumping disco beat, while the guitar atmospherics of “Stay With Me” are redolent of a certain world-devouring, ‘80s rock giant. Opener “Misery Loves Company” suggests an alternate universe punk version of Cheap Trick while “Dreaming Man” is even more outré; a lambent, silky shuffle that the band whipped up over breakfast one day. Equally, “Burned” goes from a funky, clavinet-goosed intro to an inspired jam that Colin wanted to sound “like Little Feat at 2 am at some big, summer festival.” Ditto the way piano dances around John-Angus’ super-reverbed slide on “Love Is the Real Thing”.

And perhaps most striking of all is the album’s centerpiece, “If You Wanna Start Again”, where the Trews actually find a credible détente between the grandeur of mid-tempo Foreigner and their own reliably good taste. It should be mentioned that their drummer was the force behind this particular masterpiece, right down to its ecstatic “woo-hoo” chorus. “It’s so killer,” says Colin. “That was Dalton.”

John-Angus puts it best: “It was like our first record again,” he says, of the band’s most collaborative, exploratory, and intuitive effort in years. “When you make your first record, you don’t know who the songwriter is. Those roles aren’t established yet. The band is just trying to be the best band they can be. And we were back there.”

This meant building each song from scratch, on a day-to-day basis, until the four of them were ready to hit record and take “the Jimmy Iovine approach” to tracking. Which, John Angus explains, amounts to “just playing it till it feels right.”

Notwithstanding that what you’re reading here is a band bio and a therefore a big, obvious marketing tool, let it be said that only a deaf person, a fool, or a damn liar would argue that Hope and Ruin feels anything but right. If the Trews were lost when they walked into the Bathouse, they were found by the time they walked out, “rejuvenated” in John-Angus’ words, having found hope in ruin. This is the record where the Trews sound like they’re having a fuckin’ gas.

“It was glorious,” reflects Colin. “I hope people like the record because if they do, I’ll be, like, ‘Yes! We can have fun while we’re doing it!’”