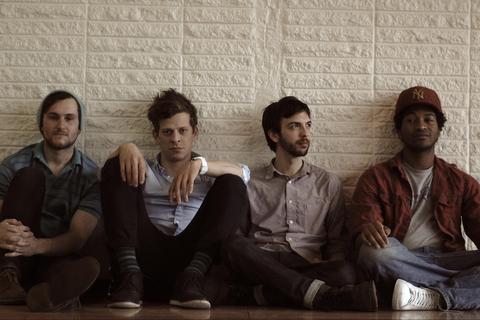 Nerves Junior is a Louisville, Kentucky four piece that focuses on blending dark electronics and sharp guitar, drums, and vocals that spread into lush soundscapes. The music of Nerves Junior teeters on the fine line between dreamy and nightmarish, as layers and layers of bold sounds swirl around changing the mood moment to moment. Nerves Junior is Zack O’Renick, Chris Snow, Brennon Staples and Brey McCoy.

Their debut LP, As Bright As Your Night Light, was met with critical acceptance as it was featured on over seventy music blogs and was named the album of the year by Pretty Much Amazing who said, “It’s a bit scary to see a band release this fully realized masterpiece so early in their career…Regardless of their future endeavors, As Bright As Your Night Light is timeless — a template for those to follow and never quite replicate.” The band followed their debut LP with a tour that included playing CMJ, Forecastle Festival, The Middle Of The Map Fest, and Hopscotch Festival.
The band is following up their successful 2011 with a new EP, Craters, released on SonaBlast! Records in February and are an official selection to SXSW 2013. The band continues to craft their uniquely dark, yet introspective songs and look to release a new album later in 2013 all the while touring extensively.