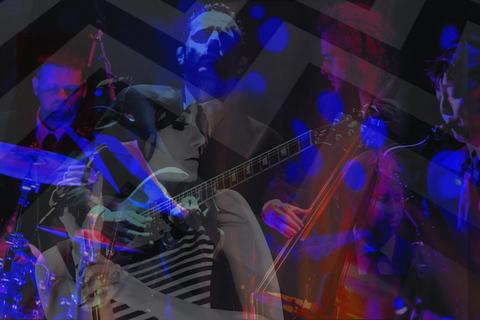 The mystery and dark intrigue surrounding the cooperative works of
David Lynch and Angelo Badalamenti has mesmerized and haunted many a subconscious over the years. There’s something unique about the pairing of Badalamentis musical scores to Lynch’s dreamy scenery that is unsettling and simultaneously familiar. There’s also an era of innocence in the music that creates a timeless appeal without regard to the modern, nightmarish and sometimes corrupt scenarios presented within the films. It’s these things that keep people perpetually fascinated with the works of these genius artists, and it’s these things that have initiated the project “SILENCIO”.

SILENCIO is a formation of musicians situated around 2 core members from the Pittsburgh based Mandrake Project- a group that’s no stranger to working within the cinematic genre. The group began as a recording project between David Jamison and Kirk Salopek who had shared a longtime mutual admiration for the work of Lynch’s films and Badalamenti’s eerie, jazzy scores. They also realized to their surprise that nothing quite like SILENCIO really existed. Of course there are the droves of Lynch/Badalamenti devotees, inspirees and bands covering the occasional movie theme, but no one seems to have embraced the WHOLE concept as a direct and focused project. Both Salopek and Jamison had a number of original ideas inspired directly from the musical selections in Twin Peaks, Mulholland Drive and Lost Highway. These ideas quickly took shape into material for the first SILENCIO record which was released in June of 2012. The album spans 17 songs with each track drawing either direct or skewed influence from the music included throughout the gamut of Mr. Lynch’s films. Not long after recording began, the search for additional players ensued and the decision to perform the project as an entire Lynch tribute was solidified. What was first planned as a rotating line-up of members turned into a dedicated, full-time cast adopting Matt Booth (upright & electric bass), Lee Hintenlang (sax), Dan Barrett (keys) and the uber-sultry Dessa Poljak handling the haunting, smoky duty of vocals.

SILENCIO performs selections from all of Lynch’s films spanning “Eraserhead” to “Inland Empire”, with a focus on the works from the “Twin Peaks” series and “Fire Walk With Me” film. The group’s original offerings seamlessly intersperse throughout the movie material and fit the occasion as if it were written as outtakes from some of Badalamenti’s “Lynch-iest” sessions. If there were ever a group to perform for an event and capture the vibe of a “damn fine cup of coffee”, cherry pie and wind through the Douglas Firs, then Silencio is surely that group.