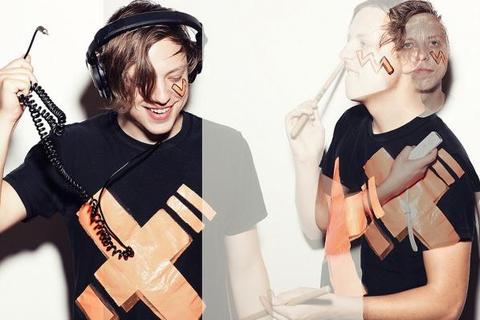 Robert DeLong is the perfect artist to bring electronic dance music to Glassnote, home of Mumford & Sons, Two Door Cinema Club, Phoenix and more. A one-man futuristic dance party with beats as cerebral as Orbital and club-ready as Calvin Harris, DeLong is also a profoundly gifted singer/songwriter who raises questions about identity and spirituality. Those two elements join together on his debut album Just Movement, a dazzling collection of dance beats, pop hooks and thought-provoking queries that could very well be the soundtrack for 2013.

“The whole album is sort of a thesis statement for my philosophy,” the 26-year-old Los Angeleno via Seattle who wrote, produced, mixed and performed the entire album himself, says. What is that philosophy? “The first song [‘Just Movement’] is the most basic kind of thesis statement. For me, when you strip away all the human moral elements of a person you’re left with the fact everything is just moving, the whole universe is vibrating different ways, moving around,” he says. “Then the rest of the album is trying to figure out what to do with that and it’s kind of a play on words too. ‘Just Movement’ is not only about the philosophical idea, but also ‘Just Movement,’ the idea of dance, that’s kind of the primal response to music.”

On the album’s second track, “Global Concepts,” a song that immediately shot to number one most requested at Albany’s WEXQ, DeLong asks, “Did I leave my life to chance? Or did I make you fucking dance?”

The answer is unquestionably the latter, proven here repeatedly, whether it’s on the fast-paced funk of “Here,” the disco-flavor of “Perfect” or the aptly named “Happy ” -- another instant radio favorite, landing in the top five most requested songs on the Locals Only show of influential L.A. radio station KROQ.

That DeLong brings people to their feet is especially true live, where his unique stage setup ratchets up the energy to a level befitting productions the size of Electric Daisy Carnival or Coachella’s Sahara Tent. A true one-man band who sings, plays a full drum set and controls his loops via video game controls like Wii-motes, joysticks and game controllers, DeLong creates a spectacle that is wholly his own.

Adding to the vibe, every show features face painting for audience members, creating a communal experience. DeLong has already dubbed his growing fanbase The Tribe of the Orphans, an apt name for the visual extravaganza the audience provides for every show with their Neverland imagery. While the face painting, usually done by DeLong’s girlfriend, enhances the bond between DeLong and his Tribe, the standout visual at the gigs is his one-of-a-kind equipment.

“That really just came out of playing in bands for so long and going to shows and being bored it’s just standing around, watching a band,” he says of the genesis of the setup. “The live show developed in a way out of necessity. It started out with me playing a couple of coffee shops in high school doing some live looping and combining it with tracks and stuff and then over time seeing what people responded to.”

A drummer from the age of 10 who started off in jazz, Robert DeLong understood his background was the crux of the dance music he’d come to love at house music parties in L.A. “I realized I’m making dance music and drums are kind of the lead instrument in dance music. So I really wanted to incorporate that,” he says. “From there [with] the Wii-mote it was just trying to find a way that was most interesting to use it. It’s funny because I sort of performed these songs before I finalized the recordings on the songs. On a lot of these songs, things like the Wii-mote ended up as an element on the album.”

When DeLong brings his music to the stage there is no gimmickry or flashiness, every instrument serves the purpose of the song and becomes an essential component to making the song flow. For him it was important that the video game components not become a stunt. “In the end it’s still about the song,” he says. “I’ve seen a lot of artists where, especially with live looping or beat making, that stuff just ends up being these guys figuring out cool things they can do, but there’s no song for anyone to attach themselves to.”

There’s no concern for DeLong about not having the songs to accompany his music. He started off as a singer/songwriter playing in bands. The electronic dance element came later, after moving from Seattle to L.A. but he made sure to keep both. How many other artists claim Sgt. Pepper’s and Board Of Canada’s Music Has The Right To Children as two of the defining works in their upbringing? Probably not many, but that mix is what makes DeLong special and has already allowed him to build a diverse following.

“I would hear from people, especially my age, they identify with the lyric and the songwriter aspect. And younger people identify with the whole dance vibe,” he says. “That’s something I’ve always strived for, to make the message easily communicable to people, but then people can still have a good time and enjoy the party.”

The show at Empire Automotive on Thursday, March 14