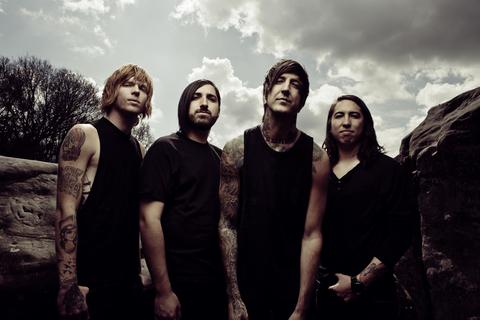 Phil Manasala - Guitar
Tastemaker publications like Alternative Press, Outburn and the
UK's Big Cheese have put them on the cover. Kerrang! placed singer
Austin Carlile amongst the Top 25 living rock stars. Of Mice & Men
continuously dominates the stage, whether they’re on the Vans
Warped Tour, headlining, supporting veteran bands like As I Lay Dying
or leading sing-alongs at festivals around the world. The group’s
ampersand ("&") symbol is as ubiquitous as it is synonymous with the
group's charismatic passion, unique creativity and pulsating energy.
"I hope that anyone that hears our band can walk away from the
experience thinking, 'I've been through something similar. I know
where they are coming from and listening to this music has helped
me,'" Carlile explains. "Our music is heavy and angry, but we have
learned that the sheer emotion of the things we write about have
helped people get through hard times. We want to help people channel
their emotions into something positive. That is 100 percent of the
reason why this band is here. This is why I'm doing what I'm doing, to
inspire. If you're not helping others, or at least contributing to
someone's benefit, then I don't understand why you'd even be alive."
The unstoppable momentum that has fueled the young frontman
since he left Attack Attack! and formed Of Mice & Men in Orange
County, California has propelled the group's songs across two
incredible records, each of them steeped in the life experiences of an
intensely hard-working artist who has lived in at least eight states.
The band's screamo / metalcore-redefining self-titled debut laid
the foundation for the album that was to follow, The Flood, which
remerged in a brand new Deluxe Edition packed with four new tracks
produced by Cameron Webb (30 Seconds To Mars, Flyleaf) and mixed
by Joey Sturgis (Asking Alexandria, We Came As Romans).
Whether listeners are dealing with broken families or broken
homes, trouble with the people around them or thoughts of suicide, Of
Mice & Men put their hearts on their sleeves and throw down a mixture
of aggressive anthems and melodic melodrama that creates an instant
connection. The video for Carlile's tribute to his late mother, "Second
and Sebring" (from the first album), has amassed over 3.2 million
views on YouTube. Songs like "Still YDG'N" are messages to anyone
who has ever felt the ground ripped from beneath their feet to stay
planted and to stay strong.
The new tracks on the two-disc Deluxe Edition of The Flood --
"The Calm," "The Storm," "The Flood" and "The Death" - form their
own conceptual EP. "The songs really tell a story," Carlile explains. "If
you really pay attention to the lyrics, it takes the listener on a small
journey."
Of Mice & Men’s obsessive attention to detail -- which
encompasses everything from the artwork to the band's constant
interaction with their fans -- is precisely why the group has built such
a strong connection with the audience. Their authenticity is palpable
and their shared struggles relatable. "Everything, from the music to
our performance, from the lyrics to the fact that we don't have
backtracks, is real," emphasizes Carlile.